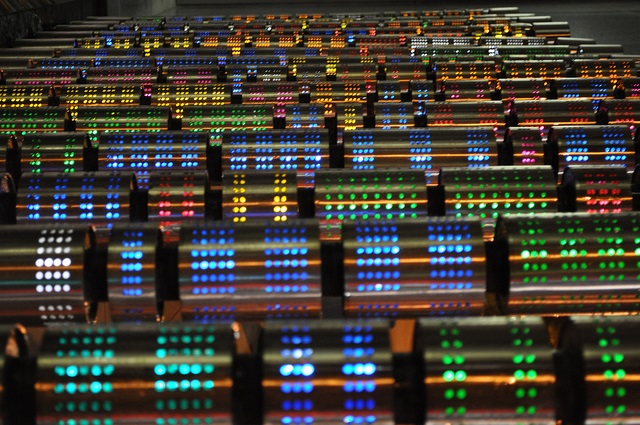 The CRISPR-Cas9 system may be a powerful gene-editing tool, but it’s no good if the best tool in your kit can’t be applied where you want to work with it. Mutagenesis and carcinogenesis have both been observed to result from the use of viral delivery vectors and so, despite these vectors being highly efficient for gene transfection, the successful non-viral delivery of CRISPR-Cas9 to cancerous cells or tissues is the current challenge facing researchers who want to harness its potential for cancer therapy.

Non-viral delivery has its own problems. The techniques trialed thus far – hydrodynamic injection and membrane deformation, for example – have either not proven efficient for delivery or have led to damage of the target cells. Even when the Cas9 protein and single-guide (sg) RNA are successfully delivered, instability of the RNA is an issue. Direct delivery (without encapsulation) has shown promise in regard to this problem, but presents new problems in terms of how to cross the cell membrane. 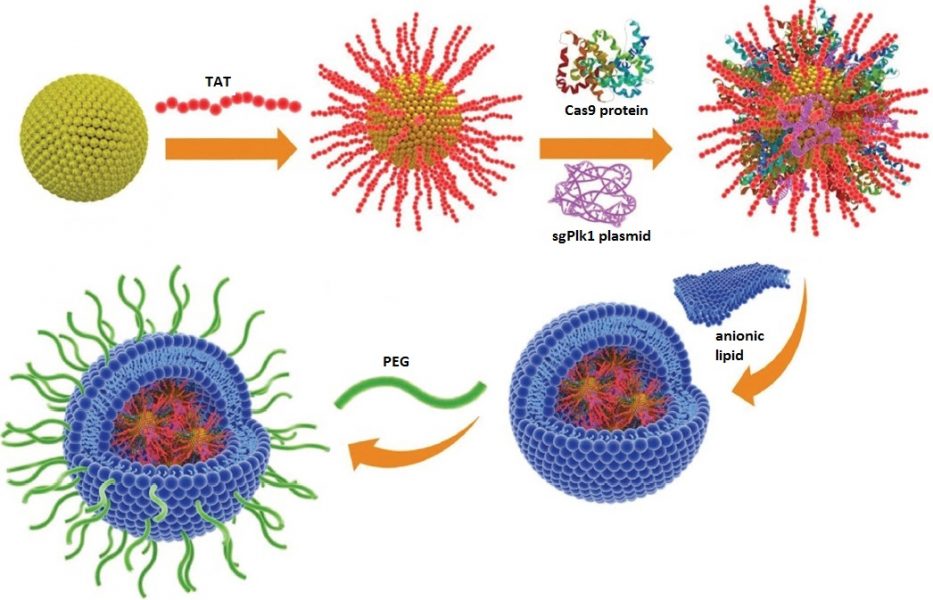 Gold nanoclusters are modified with TAT peptide, then complexed with Cas9 and sgPlk1 plasmid. The outer lipid/PEG layer facilitates delivery of the complex into A375 cells.

A team from China has now found a vehicle suitable for the non-viral delivery of CRISPR-Cas9, applying the increasingly popular, biocompatible, and chemically stable gold nanoclusters (GNs) of around 2 nm in size as the core of their vehicle. The nanoclusters were modified with TAT peptide via reduction of the gold, then electrostatically bonded to the Cas9 and a large amount of sgRNA plasmid to form a negatively charged ternary TAT-GN/Cas9/sgRNA complex.

The Cas9 and sgRNA locate close to the gold core, within the length of the TAT peptide, providing a compact structure. An anionic lipid outer shell, modified with polyethylene glycol and encapsulating multiple ternary complexes, forms the final outer layer of this delivery vehicle.

Employment of the vector was demonstrated using sgRNA targeting Polo-like kinase-1 (Plk1), which is known to be important in the regulation of mitosis and which is overexpressed in many tumor tissues. Inhibiting Plk1 can therefore lead to apoptosis, the programmed death of these cells, and inhibited tumor growth.

The TAT-GN/Cas9/sgPlk1 complex successfully enters cells and locates at the nucleus.

The vehicles were incubated in vitro with A375 cells for up to 24 hours. Internalization of the Cas9 and sgPlk1 plasmid into the cells was confirmed via fluorescence tracking after one hour, with around a fifth of each locating in the cell nucleus, making gene editing possible. Transference of the vehicles to daughter cells was also observed, as was escape of the cargo from the endosome/lysosome system, and the research team offered possible mechanisms via which this might be achieved based on the components of their vehicles.

Down-regulation of Plk1 expression and increased apoptosis of the A375 cells after internalization of the new delivery vector (here denoted LGCP).

Compared to the negative control, and compared to the ternary TAT-GN/Cas9/sgPlk1 complex without any lipid/PEG outer shell to aid its delivery, the full vector was shown to successfully affect the expression of Plk1 in A375 cells: a clear reduction (down-regulation) of its expression by over 70% was accompanied by Cas9-mediated genome modification of around 26% – ten times more effective than traditional techniques.

To see the details of their experiments, please do see their open-access article here in Advanced Science.

Further reading for more on the latest in drug or gene delivery: