A new approach to control light with light without the need for optical nonlinearity has been suggested by a Russian-British research group. 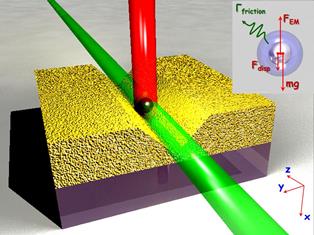 A new approach to control light with light without the need for optical nonlinearity: nanoparticle auto-oscillations in a subwavelength plasmonic V-groove waveguide induced by a control light can be used for the periodic modulation of a transmitted plasmonic signal.

Generation of optical pulses generally relies on electronically-driven modulation of continuous light beams and laser resonators with mode-locking or Q-switching options. All-optical approaches based on interacting light beams require mediating materials to induce nonlinear interaction and pulsed control light. In an alternative approach, a Russian-British team now proposes light-light interaction without the need for optical nonlinearity. They demonstrated the use of this effect for generation of waveguided pulse trains with clock frequencies determined by the intensity of the continuous control light. The method is based on a nano-opto-mechanical system integrated in a plasmonic waveguide: a nanoparticle which is moved by a control beam scatters the waveguided signal light with a position-dependent efficiency.

The team led by Alexander S. Shalin (National University for Information Technology, Mechanics and Optics (ITMO), St. Petersburg) and Pavel Ginzburg (King’s College London, UK) use a V-grove plasmonic waveguide in which a nanoparticle is placed. The optical force of the control beam tends to eject the nanoparticle from the bottom of the V-groove due to the design of the surrounding photonic structure which focuses the field below the particle. At the same time, the nanoparticle is influenced by the dispersion, friction, gravitational and optical force resulting in a pushing force in the upper part of the V-groove, keeping it from moving out of the waveguide. The balance of these different forces keeps the particle levitating in the waveguide. In the presence of a control light, the particle oscillates in the waveguide, moving in and out the field of the plasmonic waveguided mode. This movement results in the increased or decreased losses of the mode, and, thus, the modulation of the waveguide transmission. The frequency of nanoparticle oscillations depends on the intensity of the control light and not on its pulsing.

This concept was employed for a novel nano-opto-mechanical (NOM) modulator which exhibits 10% modulation depth per one nanoparticle and the response time on the nanosecond scale with the record low energy per bit requirement of about 10−18 J. The ability of careful engineering of optical forces on the nanoscale makes nanomechanical systems driven by light a new promising technology for optical signal processing and opto-fluidic technologies.

Taking the sting out of dental procedures with microneedles
Phase-Changing Metamaterials: A New Frontier in Technology
A Catalyst for Sustainable Methanol
Protein Biohybrids as a Toolkit for New Materials