Chiral photonic cellulose films are prepared, and their ability to reflect circularly polarized light (CPL) is explored. The films are promising for novel photonics applications, including polarization-based encryption. 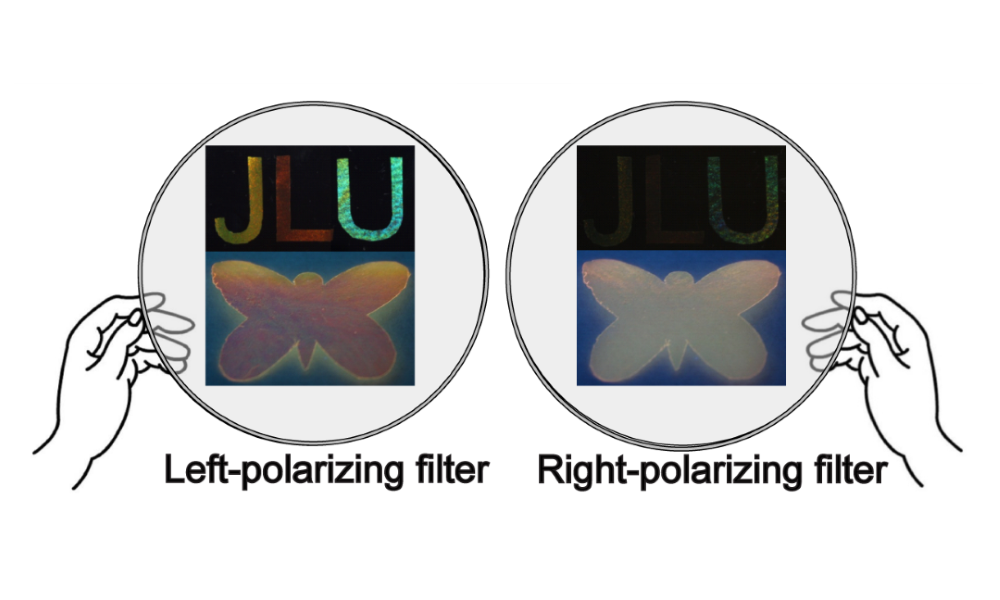 Natural and artificial light sources, such as the sun and light bulbs, are composed of randomly oriented light waves. However, light can be polarized into fixed orientations, which can be exploited to develop novel photonic materials.

In a communication in Advanced Materials, Professors Sean Xiao-An Zhang and Yan Xu from Jilin University in China, and their co-workers demonstrate the ability of cellulose, a renewable material, to reflect circularly polarized light (CPL).

The authors prepared chiral photonic cellulose films by the evaporation-induced self-assembly of cellulose nanocrystals. The photonic bandgaps (PBGs) of the resulting films can be tuned from near-UV to near-IR by salt addition and ultrasonic treatment. The left-handed helical organization of the films enables passive, left-handed CPL to be reflected, and gives rise to the film’s iridescence, which is visible to the naked eye.

In contrast to observing with the naked eye, viewing films with different PBGs through a left-polarizing filter causes greater color saturation by eliminating glare from outside sources. When the same films are viewed with a right-polarizing filter, right-handed CPL is transmitted through the films, leading to color elimination.

Composite films could also be produced by incorporating various achiral luminophores of different sizes and charges. To explore the possibility of polarization-based encryption, the authors designed a pattern consisting of neat photonic cellulose letters and a butterfly composed of composite photonic cellulose with different luminophores. Under 365-nm irradiation, only the butterfly was visible, appearing orange when viewed through a left-polarizing filter and beige through a right-polarizing filter.

To find out more about these chiral cellulose films for photonic technologies, please visit the Advanced Materials homepage.