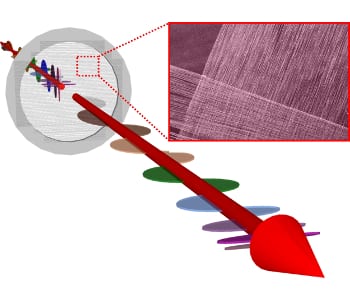 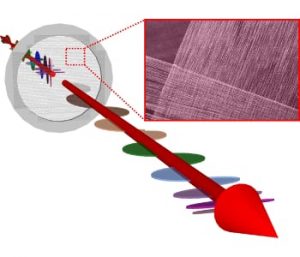 These membranes are used as an ultra-broadband polarising media. Dichroic films, and other traditional polarisers, have limited optical windows over which they can polarise due to the deleterious optical effects of the supporting substrate and the scale of the rod-like elements of which they consist.

In order to increase this wavelength window, these authors developed a means of fabricating highly aligned carbon nanotube membranes, which show comparable extinction ratios to that of established polarising technologies for continuous-wave excitation from 400 nm to 2.5 mm.

By exploring the underlying growth conditions of the vertically aligned carbon nanotubes, a model is developed to account for the observed degree of adhesion between adjacent nanotubes, allowing membranes to be mechanically pulled out from as-grown nanotube forests. The subsequent horizontal, aligned, multiwalled carbon nanotubes are stable at room temperature for extended durations, without any need for a supporting substrate or further chemical treatments.

This solid-state extrusion process is simple and inexpensive, and the growth and alignment process has intrinsic manufacturing worth: it is large-area compatible and highly parallelised, resulting in a viable route towards robust and widely applicable sub-wavelength nanostructured anisotropic membranes. This represents a new paradigm in the design and fabrication of optical components for possible application in the emerging supercontinuum light sources.