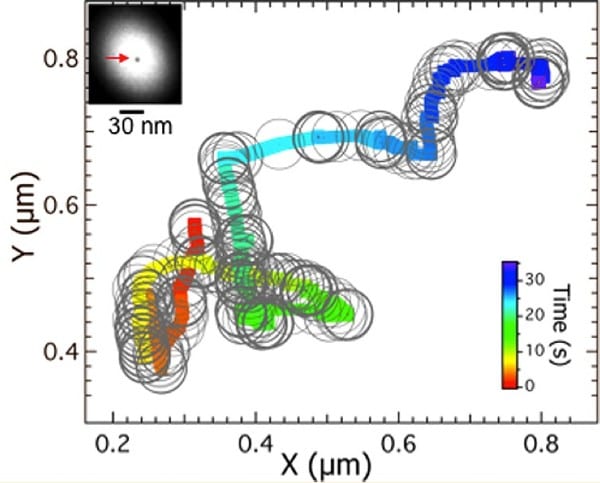 Moving a nanoparticle at will: this image depicts the trajectories of the electron beam movement and the overall movement of a trapped gold nanoparticle.

Nanotechnology, the manipulation of matter at the atomic and molecular scale, holds great promise for everything from incredibly fast computers to chemical sensors that can sniff out cancer cells. But how does one go about building a device made of parts that are one-billionth of a meter in size?

Over the years, scientists have developed tools for this microscopic handiwork. Take for example optical tweezers, which use light to trap and move objects that measure one-millionth of a meter. Researchers use optical tweezers to manipulate biological materials such as proteins. However, using light to manipulate even smaller nanometer-scale objects is tricky business. There are other techniques for the job, but it’s safe to say there’s plenty of room for more tools in the nano toolbox.

Based on their results, the scientists believe their approach could lead to a new way to build nanostructures one nanoparticle at a time. 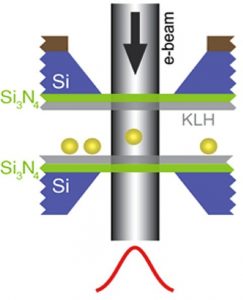 How to trap a gold nanoparticle in an environmental cell: an electron beam passes through a silicon nitride window and grabs the nanoparticle.

The research was co-led by Haimei Zheng of Berkeley Lab’s Materials Sciences Division. She and colleagues began by sandwiching a ten-nanometer-diameter particle of gold between two transparent silicon nitride membranes. This liquid-filled sandwich, called an environmental cell, enables objects to be imaged with a transmission electron microscope at a sub-nanometer resolution. The environmental cell was developed at Berkeley Lab.

They then passed an electron beam through the cell and trapped the nanoparticle in the beam. The nanoparticle bounced to and fro within the beam, but never escaped its confines. When they moved the beam in any direction at a speed of about ten nanometers per second, the trapped nanoparticle was dragged across the membrane surface.

Next, the scientists trapped several gold nanoparticles inside the beam and corralled them into a tight bunch by rapidly decreasing the diameter of the beam from 200 nanometers to 50 nanometers. They also moved the cluster of nanoparticles over the membrane surface by moving the electron beam.

Zheng and colleagues are now working to understand how the electron beam traps the nanoparticles. They also want to develop ways to automate the positioning and movement of nanoparticles, which is a key step toward the fast and efficient assembly of nanostructures.