A pair of micro-scale pliers was made from a liquid crystalline elastomer and fiber optic wire, which can reversibly change shape in response to visible light. 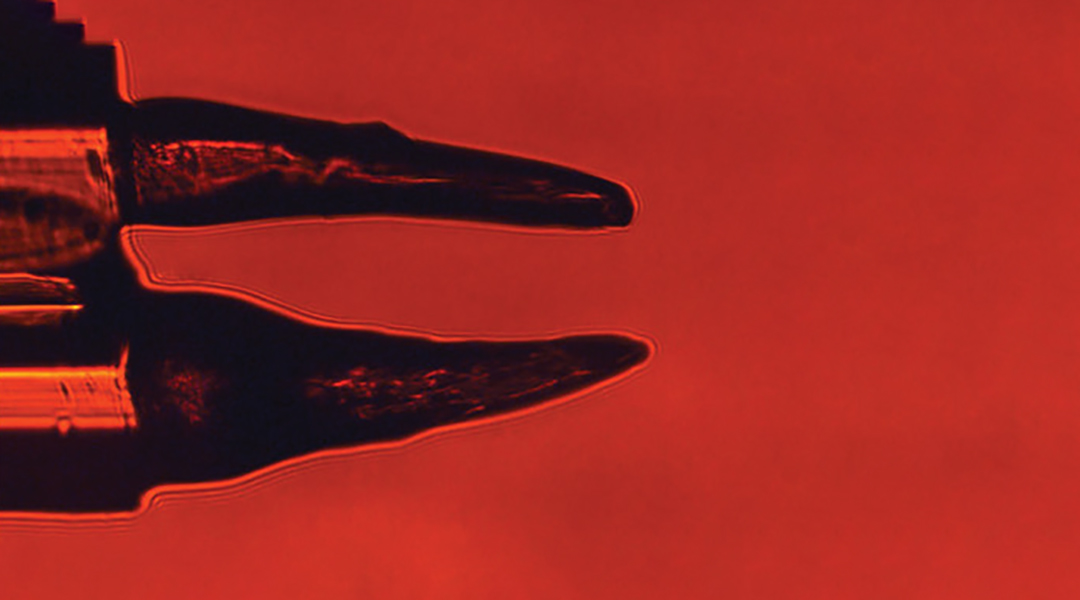 Mechanical grips are important elements in robotics, manufacturing, and medicine, with numerous, ubiquitous applications in a number of fields. However, scaling down this technology to the micro-scale is no easy feat given the complexity of engineered systems and the need to deliver an adequate amount of force to carry out the desired task.

In general, man-made grippers, such as robotic arms or even something as simple as a pair of pliers, are rigid structures with hinged jaws that are either manually manipulated or manipulated through external electric, hydraulic, pneumatic, or piezoelectric servos. While easy to implement on a large scale, on small scale, the actuators responsible for controlling the movement of a mechanical system must transmit mechanical energy through other, subtler means.

In a recent study published in Advanced Materials, a team of researchers from the University of Warsaw and the AGH University of Science and Technology in Cracow, Poland explored using light to generate mechanical energy on the micro-scale.

To do this, the team of researchers created a pair of micro-scale pliers made from a liquid crystalline elastomer, which can reversibly change shape in response to exposure to visible light.

The device was built by growing two bending jaws on the tips of hair-sized optical fibers, whose motion is controlled by the photothermal effect, in which a material becomes excited and as a result, produces thermal energy. This heat can result in elongations at the material’s surface and a bending of the material.

To make their micro-pliers, the team grew two bending jaws on the tips of hair-sized optical fibers using light‐triggered polymerization. UV light was delivered through the fiber itself, which was placed into a cell filled with molecular units or monomers for the polymerization reaction. The UV light triggered polymerization or “growth” of the liquid crystalline elastomer material, which was carefully controlled to extend from the fiber’s tip. The plier’s mode of actuation (or more simply, the direction each elastomer unit bends in) depends on the monomer’s initial orientation inside the reaction cell, and magnitude of bending also depends on the intensity of the visible light delivered via the pliers’ supporting fiber.

To demonstrate the proof-of-concept capabilities of their micro-pliers and to estimate its grip strength, the team showed them gripping and pulling a 50 µm copper wire fixed to a microscope plate.

The team envisions applications such as handling and manipulating living cells, however, optimization is still required to have the pliers operate efficiently in aqueous environments, wherein the photothermal effect would be limited.