A Yellow Polariton Condensate in a Dye Filled Microcavity

An optical microcavity is a structure that is created by placing two high reflecting mirrors in close proximity. By placing a material into a microcavity that can both absorb and emit light, it is possible to create new types of particles called ‘polaritons’. Such states have the unusual property of being a mixture of light and the excitations of the material in the cavity, and have been described as a form of liquid light. If a large number of polariton states can be created, a process called condensation can occur in which all polaritons have the same energy, with their wavelike properties becoming locked together with the same ‘phase’. The light that leaks out of the cavity then has many of the properties that you would expect from a laser (color, directionality, etc.), with this process termed polariton-lasing. 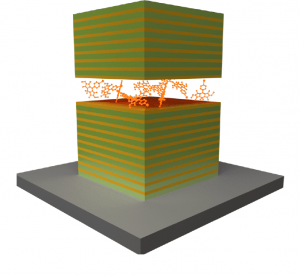 Schematic of the dye filled microcavity.

In a study, recently published in Advanced Optical Materials, a group of researchers around Pavlos G. Lagoudakis and David G. Lidzey presents polariton condensation and lasing from a microcavity containing the fluorescent dye BODIPY-Br. BODIPY dyes are of significant interest as sensor materials and in biological labeling, and the paper reports about the first demonstration of condensation in this class of materials. In their experiments, the researchers characterize polariton condensation in a microcavity using a range of optical techniques and use optical interferometry to study the wavelike properties of the condensate. This technique indicates that different spatially separated parts of the condensate (which has a size approaching the diameter of a human hair) are locked in phase with one another. The authors believe that the condensates observed hide rich physics, with such structures being of interest in the development of new devices, including high-efficiency lasers and light-sources.

Text kindly provided by the authors of the original manuscript and edited by Anja Wecker.