Researchers create a new and elegant way of producing nanostructured microparticles, yielding a vibrant palette of colors from a single polymer brush. 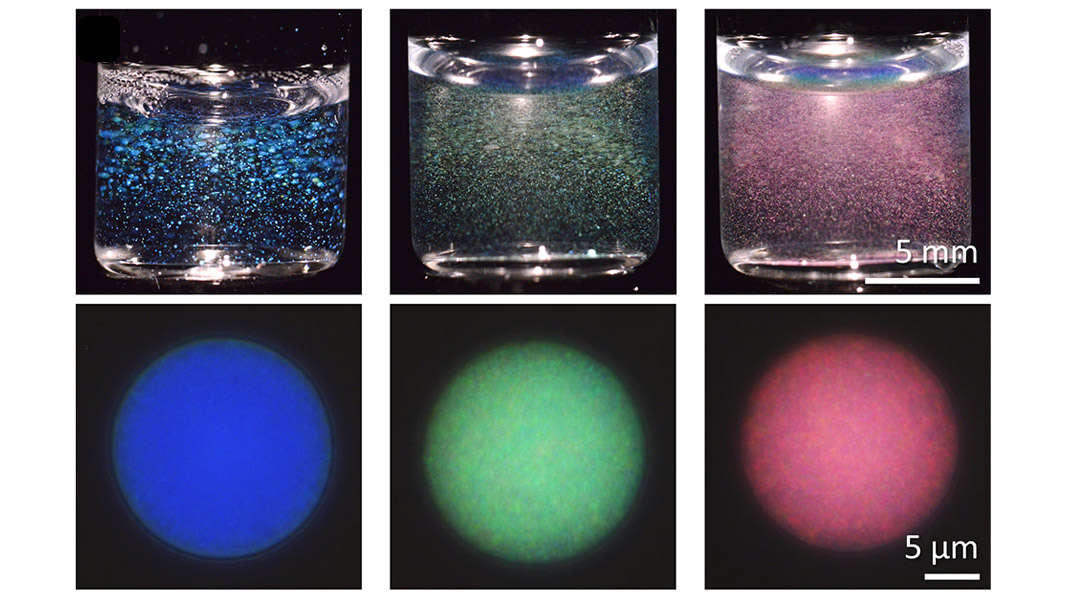 Have you ever wondered how peacock feathers shine with so many brilliant colors all at the same time? In contrast to pigment-based coloration, many materials are colored through a phenomenon called “structural coloration” where colors are formed as a result of the reflection of light by periodic microscopic structures on their surface. These structural‐based alternatives can be more vibrant, durable, and eco‐friendly.

“’Structural coloration’ is responsible for many of the most vibrant colors in nature,” said Professor Silvia Vignolini from the University of Cambridge. “From the metallic wing of the Morpho butterfly to the vibrant feathers of the Peacock. In these natural examples, intense coloration is produced not by the absorption of light, but instead from the reflection of light from precisely defined nanoscale architectures.”

Peacock feathers, for example, contain brown pigments, but due to tiny structures found on the feathers’ surface that reflect only specific wavelengths of light, they appear blue, turquoise, and green depending on the viewer’s angle.

Vignolini is part of a team of experts, including Dr. Richard Parker, seeking to utilize structural coloration to overcome some longstanding challenges in the industry. Finding a sustainable and non-toxic alternative to the many coloring techniques used today — many dyes are toxic or produce toxic waste during synthesis — is a long-time goal.

“We report a simple and scalable route to produce new pigments, exploiting the principle of structural color that could be used as a replacement for colorants in paints or for passive displays,” she explained.

As such, extensive research efforts have been invested in developing what are called “photonic materials”, which produce color due to their own controlled interactions with light. However, there is still a hitch to their widespread application.

“While photonic materials capable of producing vibrant colours have been extensively studied,” said Vignolini, “they are typically focused on nanostructured systems with long-range order.”

Long-range order refers to the “orderliness” of nanostructures on the material’s surface over specific intervals larger on the microscale. This is a problem because while these types of materials are easier to make, they are naturally iridescent, meaning they gradually change color as the angle of view or illumination changes, like a soap bubble or oil in water. This makes their coloring difficult to control.

“To produce a non-iridescent photonic material, it is instead necessary to ensure there is only short-range correlation, [which exhibit surface arrangements within the nanoscale],” added Vignolini. “However, [these materials] are challenging to fabricate in a reproducible and scalable manner, arising from the need to precisely control the degree of disorder in the system.”

In a study published in Advanced Materials, the team succeeded in solving this challenge by introducing a new and elegant way of producing nanostructured microparticles with precise control over their dimensions for short-range order. Vignolini highlights that “the vibrant palette of colors was prepared from a single polymer brush, avoiding the need for complex synthesis”.

Their method is based on a single and scalable self-assembly of “bottlebrush” block copolymer, named after their molecular structure, which resembles that of a bottlebrush. “Block copolymers have been shown to self-assemble into a wide library of architectures and structures, however the dimensions are typically too small to produce photonic structures,” said Vignolini. “By using rigid polymer brushes we are able to translate such architectures to a scale that can interact with visible light.”

To begin, these polymers are dissolved in micron sized drops of toluene, after which water is controllably diffused into these droplets. “This is then stabilized by the polymer brushes, which act much like giant soap molecules,” said Vignolini.

“As the drop of toluene then dries, the similarly sized water droplets (coated with a layer of the polymer brushes) are packed tightly together,” she said. “Upon complete drying, the water evaporates to leave behind a porous particle with thin walls made from the polymer brushes.”

This technique allowed the team to structure the polymers on the nanoscale. Crucial here is the formation of similar sized pores with precise separation, retaining a certain degree of disorder due to the deformable droplets. “It is this combination of short-range order between the pores, and [lack of] long-range order across the particle that gives rise to the unique optical properties [of these microparticles],” stated Vignolini.

She continues that this procedure does not rely “on the droplet interface to directly template the assembly process, which offers the advantages of a high tolerance to structural defects, a rapid fabrication time, and color-independence from the microparticle.” Furthermore, one type of polymer brush results into several vibrant colors, ultimately avoiding complex synthesis steps.

“The biggest barrier to translating this technology [into industry],” Vignolini said, “is the synthesis of the polymer brushes, which currently relies upon expensive catalysts and precise chemical synthesis. As concerns over microplastics in the natural environment continue to grow, the degradation pathways of such photonic pigments need to be taken into consideration.”

As such, the future of this project will be spent focusing on the development of “a new generation of polymer brushes […] that employ biopolymers as building blocks and exploit scalable, green synthetic pathways”.