The new James Webb Space Telescope will collect infrared light from distant corners of the cosmos, enabling scientists to see further than ever before. 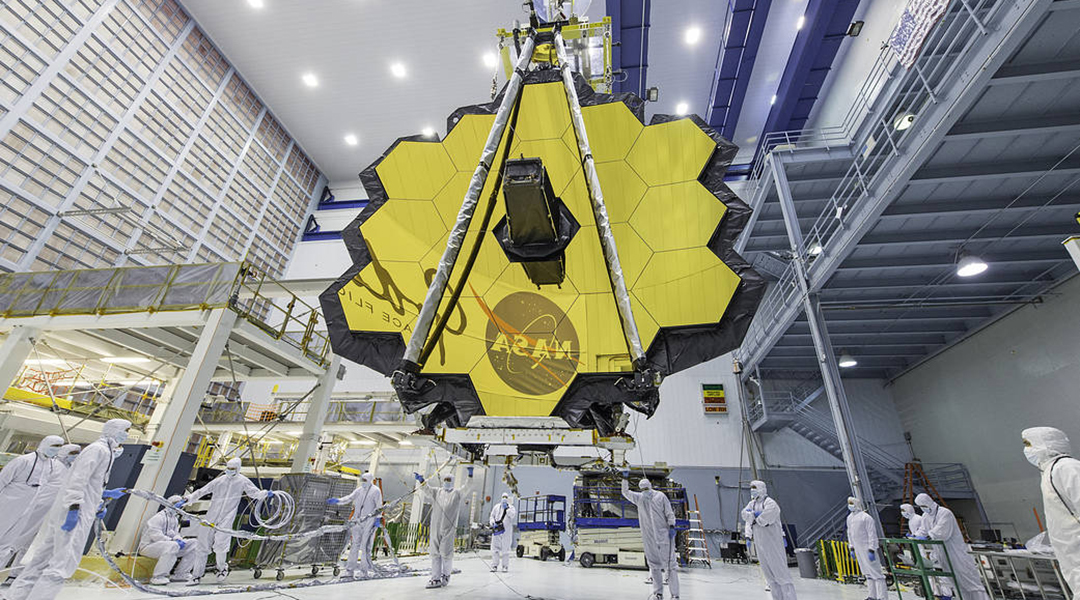 Three decades in the making, NASA’s successor to the famous Hubble telescope will launch next week, and the excitement is building.

A joint program between NASA, the European Space Agency, and the Canadian Space Agency, the James Webb Space Telescope — or Webb for short — will be the largest, most complex space observatory to date. Fitted with a powerful suite of instruments, it will see further into the universe than any other telescope, and will be used to solve mysteries in our solar system, probe the origins of the universe, and push the boundaries of scientific knowledge.

“It is destined to be a household name, like its predecessor, Hubble,” wrote NASA scientists.

The early universe captured in infrared

Telescopes can be thought of as time machines. Since the distance between objects in space is so large, it takes light a significant amount of time to travel between them. As a result, telescopes, like Hubble and Webb, can be used to capture snapshots from the early universe, providing a glimpse back in time.

Before Hubble was launched in 1990, astronomers relied on ground telescopes, which, comparatively, cannot peer very far into the cosmos because the Earth’s atmosphere absorbs most of the short wavelength light needed to detect faraway galaxies, stars, black holes, and planets. As the first orbiting telescope, Hubble caused a revolution in astronomy, most notably with its famous Deep Field images.

Webb will take this a step further, complimenting Hubble’s capabilities, which observes the universe primarily through visible and ultraviolet light. As the first general purpose infrared telescope, Webb will take us back to the realm of the very first stars and galaxies, which formed when the universe was a mere 100,000,000 years old.

Through a process called cosmological redshifting, ultraviolet and visible light emitted by cosmic objects is stretched toward the infrared region of the spectrum as the universe expands. This new ability to observe ancient starlight will allow scientists to look back to where the first objects may have been formed in time.

Infrared detection will also expand astronomers’ observational capabilities. “It opens up what I called the infrared treasure chest,” said John Mather, lead scientist on the James Webb Telescope and Nobel Prize winner for his work on the Cosmic Background Explorer satellite, in an interview. “Infrared is important for astronomers because cooler objects that cannot glow or emit visible light are able to emit infrared.”

There is also the added advantage that infrared light is scattered less by dust compared to visible and ultraviolet light, which will allow scientists to not only see previously obstructed objects, but to probe clouds of dust where stars and planets are born.

“Every time scientists build a new instrument, we discover something new,” said Mather. “We have lots of reasons to be skeptical of our understanding of the early universe. We have a pretty good story called the Standard Model, where dark matter, dark energy, ordinary matter, and gravity are pulling things together after the Big Bang. But where did dark matter and energy come from? And we don’t know that that’s the only stuff out there. We could get a big surprise way out there in the early universe.”

Webb will expand on the work of other observatories such as Kepler, TESS, Hubble, and ALMA, seeking out and imaging exoplanets within the known universe. Over its lifetime, Webb will search for hundreds, if not thousands, of planets orbiting distant stars.

One such strategy is using spectroscopy. Alien planets are sometimes identified by periodic dips in the brightness of the stars they orbit, which occurs when a planet passes between a star and measuring telescope. Since the discovery of the first exoplanet in the early 1990s, scientists have only been able to scratch the surface of what can be learned about exoplanets through their light signatures. With the Webb telescope comes the opportunity to dig deeper.

With advanced instrumentation, Webb will allow scientists to gain new insights into the physical and chemical properties of planetary atmospheres — those in distant galaxies and within our own solar system.

A planet’s atmosphere contains vital information about what that world might be like — from planets than rain iron to worlds with underground oceans — and astronomers believe that hidden is this data could be the building blocks of life. Within our galaxy alone, there are over a billion Earth-sized habitable planets.

Through spectroscopy, molecules and atoms can be identified because they emit and absorb specific frequencies of light, creating their own signature that allows astronomers to identify them even in very small quantities. Taking Earth as an example, geology on our planet produces carbon dioxide and methane, but living organisms produce methane in greater quantities.

Methane on its own doesn’t indicate life, but looking out for delicate combinations of gases such as methane, carbon dioxide, oxygen, ozone, and water could help determine if conditions on Earth are common (or unique) within the universe.

One of the first planetary systems Webb will image is the TRAPPIST-1 system, located 39 light-years away. It contains a small star, roughly the size of Jupiter, with seven orbiting planets, three of which could be potentially habitable — they exist within the star’s habitable zone, where liquid water can exist on their rocky surfaces.

But life could also take on forms that differ from those found on Earth. There is still so much to learn and discover within this field, and Webb will bring us one step closer to determining what or who else exists within the universe.

“I feel confident that my grandchildren will be able to look up in the sky and point to a star and say, ‘There’s life’,” said Natalie Batalha, in an interview with Quanta Magazine. Batalha is an astronomer at the University of California, Santa Cruz, who led the team that discovered the first rocky exoplanet. “It’s going to put an end to cosmic loneliness.”

Webb will also help identify uninhabitable planets to learn as much as we can about them, as well as examine every object within our own solar system, from planets to comets, beginning with Mars. This will help to answer questions around how planets form, how life developed on Earth, whether comets and other distant icy bodies contain clues about our origins, and whether there was or is life on our neighboring planets.

Near and far, Webb is likely to uncover long sought-after answers. “Webb has this broad power to reveal the unexpected. We can plan what we think we’re going to see, but at the end of the day, we know that nature will surprise us more often than not,” said Webb scientist Klaus Pontoppidan in a November press briefing.

Getting Webb into orbit

After launch, Webb will be sent 1 million miles (1.5 million km) away from Earth, to a location between the Earth and Sun called a Lagrange point. After one month of travel, Webb will be positioned at a location called L2, which is directly behind the Earth — on it’s night side — and in line with the Sun. Here, the centrifugal force Webb will experience orbiting the Sun is balanced by the Sun and Earth’s gravitational pull. This will allow the telescope to follow the Earth around the Sun every 365 days.

As an infrared telescope, Webb needs to be kept cold and away from bright and hot objects to minimize unwanted interference. As such, Webb has also been fitted with a sun shield made of five layers of thin plastic coated with metal. This ensures the telescope and instruments are exposed to nothing but cold space while the shield’s hot side remains bathed in sunlight to power the telescope via a solar array.

Currently, the telescope has been neatly folded inside a rocket, waiting for liftoff. Its huge, hexagonal mirror, built to help focus dim celestial light with unprecedented sensitivity, is a marvel of engineering. Made from light-weight beryllium, scientists had to design it such that it holds its shape in the frigid vacuum of space, where temperatures are 40 Kelvin (-233°C or -388°F).

Once it has reached its orbit around the Sun, the telescope will carefully unfurl itself through a sequence of events that will take over 29 days to complete — the sun shield in particular needs to be pulled out in a series of intricate steps. This will be particularly harrowing for scientists: if anything goes wrong, Webb will be too far away to service. Afterwards, the telescope and its instruments will need time to be set up and allowed to cool down, all of which should take about six months total.

In the meantime, people around the world are anticipating its launch date, which will take place on December 24. A live broadcast from Mission Control will be available here.