Methane on Enceladus could be a possible sign of life

Is life bubbling under the surface of Saturn's ocean moon? 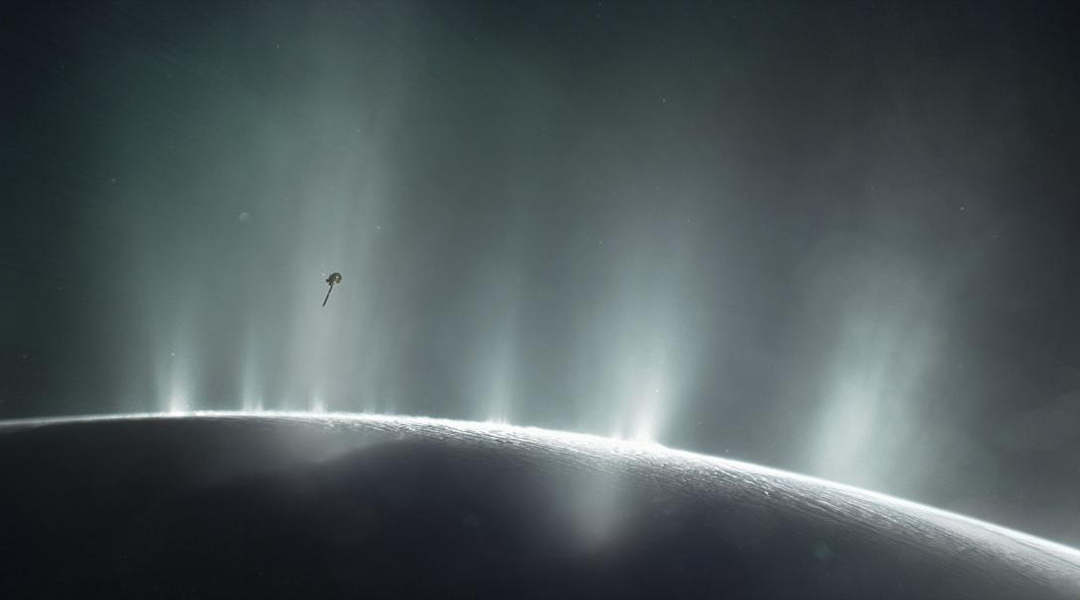 This artist’s impression depicts NASA’s Cassini spacecraft flying through a plume erupting from the surface of Enceladus. Image credit: NASA

Beneath the icy shell of Saturn’s moon Enceladus could be proof of life on another planet. Data collected by NASA’s Cassini spacecraft hints at an unknown methane-producing process at work in the moon’s hidden ocean.

Saturn’s moons are considered one of the most likely locations for extraterrestrial life in our solar system. With a liquid ocean covered by a thick ice layer, giant plumes of gases and frozen sea spray continually erupt from Enceladus’ surface into space. In one of its fly-by missions, which took place between 2004 to 2017, Cassini flew through one of these plumes in order to analyze the ocean’s chemical makeup, and detected high concentrations of molecules also found in Earth’s underwater hydrothermal vents; namely dihydrogen, methane, and carbon dioxide.

What has piqued the interest of astrobiologists is the unexpectedly high levels of methane, which can’t easily be explained by known geochemical processes. Instead, a team of scientists from the University of Arizona and Paris Sciences & Lettres University speculate a possible biological origin.

“We wanted to know: Could Earth-like microbes that ‘eat’ the dihydrogen and produce methane explain the surprisingly large amount of methane detected by Cassini?” said Regis Ferriere, associate professor at the University of Arizona. “Searching for such microbes, known as methanogens, at Enceladus’ seafloor would require extremely challenging deep-dive missions that are not in sight for several decades.”

On Earth, hydrothermal activity occurs when cold seawater seeps into the ocean floor and comes into contact with an underground heat source, such as a magma chamber, before being spewed out into the ocean again through hydrothermal vents. Methane is naturally produced this way, but this process occurs slowly.

But something is making large amounts of methane on Enceladus. While the presence of methane is not conclusive on its own, it’s definitely a good sign, and with water, hot vents, and a hydrogen food source, Enceladus could be the perfect environment for methanogen microbes.

First, they established whether the amount of dihydrogen found on Enceladus could sustain a population of a hypothetical hydrogenotrophic methanogen, whose thermal and energetic niche was modeled after known strains from Earth. The group then ran a second model to determine if the chemical conditions and temperature could provide a suitable environment for these microbes to grow. They also looked at what effect a hypothetical microbe population would have on its environment – for example, on the escape rates of dihydrogen and methane in the plume.

“Not only could we evaluate whether Cassini’s observations are compatible with an environment habitable for life, but we could also make quantitative predictions about observations to be expected, should methanogenesis actually occur at Enceladus’ seafloor,” Ferriere explained.

The final tally indicates that even in the best case scenario of non-biological methane production, the levels of methane would not be anywhere near the observed concentration found in the plumes. Only when microbes are thrown into the mix do the computer model’s methane levels match Cassini’s observations.

“Obviously, we are not concluding that life exists in Enceladus’ ocean,” Ferriere said. “Rather, we wanted to understand how likely it would be that Enceladus’ hydrothermal vents could be habitable to Earthlike microorganisms. Very likely, the Cassini data tell us, according to our models.

“And biological methanogenesis appears to be compatible with the data. In other words, we can’t discard the ‘life hypothesis’ as highly improbable. To reject the life hypothesis, we need more data from future missions,” he added.

As Ferriere said, this is not conclusive proof, but a good sign. There are, of course, other possibilities: for one, methane could be produced by the breakdown of primordial organic matter present in Enceladus’ core. This hypothesis is very plausible if it turns out that the moon formed through the accretion of organic-rich material supplied by comets, Ferriere explained.

“It partly boils down to how probable we believe different hypotheses are to begin with,” he said. “For example, if we deem the probability of life in Enceladus to be extremely low, then such alternative abiotic mechanisms become much more likely, even if they are very alien compared to what we know here on Earth.”

Quotes adapted from press release provided by the University of Arizona

What archaeology of the remote past can tell us about our future under climate change
New Information on Binary System After Decade-Long Observation
Endometriosis treated by heating magnetic nanoparticles
Is your work not novel enough?