An exoplanet that rains iron

ESO telescope oberves an exoplanet 690 light years away where night and day surface temperature differences cause iron to rain from the sky. 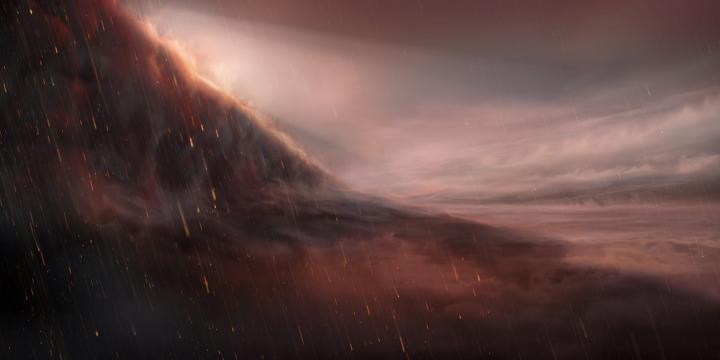 Researchers from the Observatoire astronomique de l’Université de Genève have observed an “ultra-hot giant exoplanet” where it rains iron. The planet, named WASP-76b, is 640 light years away from Earth, and has daytime surface temperatures that exceed 2400 °C — high enough to vaporize metals. According to the researchers, the high-temperature atmospheres of these types of exoplanets are ideal for studying extreme planetary climates and chemistry.

The team of researchers, led by David Ehrenreich, a professor at the University of Geneva in Switzerland, suspect the iron rain occurs because the planet only ever shows one face to its star — much like our own moon, which only shows us one face because it rotates on its axis at the same rate that it orbits the Earth. As a result, the day side receives intense amounts of radiation (thousands of times more than we receive on Earth), while its night side remains relatively cool and in perpetual darkness. These temperature differences drive winds that move vaporized iron from the day side to the night side, where lower temperatures result in its condensation to liquid form and iron rains.

“Ultrahot giant planets are the best laboratories we have for studying extreme climates on exoplanets. If we observe an exoplanet during its transit across the disc of its star we can study the part of its atmosphere through which the light from the star passes. With ESPRESSO it has been possible to detect chemical variations using analysis of the small part of the atmosphere we can observe”, adds Núria Casasayas Barris, researcher at the IAC and Ph.D. student of the University of La Laguna (ULL).

According to Ehreneich, the team was surprised that this phenomenon only occurs on the planet’s evening border, as this was the only location they were able to detect a strong iron vapor signature in its atmosphere. “Iron must thus condense during its journey across the nightside,” they stated in their study.

These observations were made possible with ESPRESSO and ESO’s VLT, which were originally designed to search the heavens for Earth-like planets. But now researchers are tapping into the telescope’s true potential in their quest to study planets outside our own solar system. “We soon realized that the remarkable collecting power of the VLT and the extreme stability of ESPRESSO made it a prime machine to study exoplanet atmospheres,” said Pedro Figueira, ESPRESSO instrument scientist at ESO in Chile.

“What we have now is a whole new way to trace the climate of the most extreme exoplanets,” concludes Ehrenreich.