A multiple core–shell 3D printing method has been developed to fabricate soft, stretchable, fibre-based, capacitive strain sensors. The sensors can be readily integrated into conventional clothing and used in gait monitoring.

Advances in materials science over the past decade have opened the door to an exciting new class of electronic materials – stretchable electronics. From flexible displays that will revolutionise the smartphone and tablet market, wallpaper lighting removing the need for conventional light globes to a new generation of medical tools and energy storage devices, stretchable electronics is set to be a game-changing technology. One particularly burgeoning application area is wearable electronic systems; for example, soft strain sensors that can be worn and used to study biomechanics and kinesiology.

Strain sensors are devices that quantify strain based on changes in the electrical properties of the sensor in response to deformation. Traditionally the electrical property of interest for wearable strain sensors is resistance (resistive sensing).  Resistive sensors are typically composed of a deformable conducting material attached to, or encapsulated in a stretchable matrix, and can be either skin-mounted (i.e. in an artificial skin system) or textile-integrated. Various materials have been used as the conductive component in resistive sensors, including carbon inks, ionic fluids and liquid metals. However, there are serious drawbacks associated with each of these materials; for instance, carbon inks and ionic fluids suffer from hysteresis at high strains and liquid metals require complex fabrication protocols. 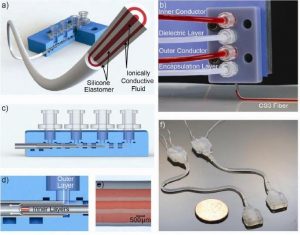 To overcome these limitations, Jennifer Lewis, Conor Walsh and colleagues at Harvard University have created a capacitive, fibre-based soft sensor that can detect elongational strains. Capacitive sensors, which have predominantly been used in pressure and shear sensing, typically consist of a dielectric layer sandwiched between two conductive layers, the thickness of which changes under an applied strain. Using a core–shell 3D printing method developed by Lewis for producing optical waveguides in 2011, their team produced core–shell fibres composed of four concentric, alternating layers of an ionically conductive fluid (a non-volatile blend of glycerol, sodium chloride and polyethylene glycol) and a silicone elastomer that serve as the conductor and dielectric, respectively (see Fig. 1). Fibre-based materials offer the advantage of being easily integrated with clothing, while the capacitive sensing motif eliminates the material shortcomings prevalent in resistive sensors. 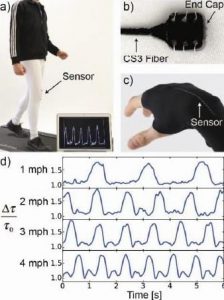 Fabrication of the sensors involves printing and post-printing steps. The conductive and elastomeric inks are loaded into separate reservoirs and co-printed through a custom-made printhead with four co-axial cylindrical nozzles to produce the core–shell fibres. The dimensions of the fibres are controlled by adjusting the nozzle size, printing speed and flow rates of the ink. To make the electrical connections, the fibre tips are subsequently cut, exposing the inner filament layers and allowing a silver wire (for electrical connection) to be inserted into the inner core. The ionic fluid surrounding the wire is then displaced by injecting a stiff silicone elastomer. After curing, a second wire is inserted in the outer conductive layer and the sensors are attached to endcaps, completing the assembly.

The mechanical and electrical properties of the fabricated sensors were tested, and the results compared favourably to model predictions. The sensors were demonstrated to be highly stretchable under longitudinal strains up to 700%, possessed a very high signal-to-noise ratio, and importantly, were hysteresis-free – a clear advantage over existing resistive-sensing based motifs. To demonstrate the suitability of the sensor for wearable applications, human gaits were monitored by integrating the sensor in the fabric at the knee as shown in Fig. 2. Owing to their easy integration into textiles and superior performance, these capacitive sensors have great potential in wearable electronics, human/machine interfaces, soft robotics and exosuits.