Wear understood at the atomic level 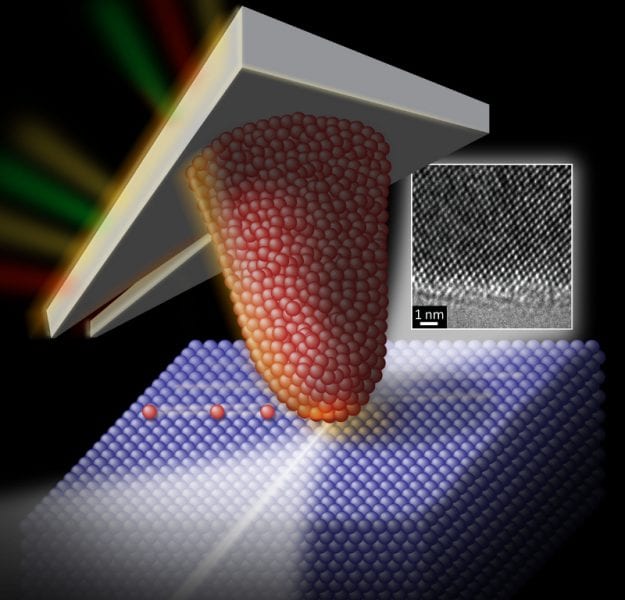 An illustration of a silicon AFM tip sliding over a diamond surface, with a TEM image of the tip inset. Image: Felice Macera.

Wear is a fact of life. As surfaces rub against one another, they break down and lose their original shape. With less material to start with and functionality that often depends critically on shape and surface structure, wear affects nanoscale objects more strongly than it does their macroscale counterparts.

Worse, the mechanisms behind wear processes are better understood for things like car engines than nanotech devices. But now, researchers at the University of Pennsylvania’s School of Engineering and Applied Science have experimentally demonstrated one of the mechanisms behind wear at the smallest scale: the transfer of material, atom by atom, from one surface to another.

The research was conducted by Tevis Jacobs, a doctoral student in the Department of Materials Science and Engineering, and Robert Carpick, department chair of Mechanical Engineering and Applied Mechanics.

Their research was published in the journal Nature Nanotechnology.

On the nanoscale, wear is mainly understood through two processes, fracture and plastic deformation. Fracture is where large pieces of a surface break off at once, like when the point of a pencil snaps off in the middle of a sentence. Plastic deformation is what happens when the surface changes shape or compresses without breaking, like when the edge of knife gets dull or bent.

“At the nanoscale, wear is a very significant problem,” Jacobs says. “Nanotechnology is developing smaller and smaller parts for very tiny machines. Their contact interfaces wear out very quickly, sometimes surviving for hundreds of cycles when they need to survive for trillions or more.”

One wear mechanism that had been hypothesized for the nanoscale is a process known as atomic attrition. There, atoms from one surface are transferred to the other surface via a series of individual bond-forming and bond-breaking chemical reactions. Other researchers have attempted to test this process by putting two surfaces in contact and sliding one against the other.

Those previous investigations involved atomic force microscopes. Using an AFM involves dragging a very sharp tip mounted on a flexible cantilever over a surface while a laser aimed at the cantilever precisely measures how much the tip moves. By using the tip as one of the surfaces in a wear experiment, researchers can precisely control the sliding distance, sliding speed and load in the contact. But the AFM doesn’t visualize the experiment at all; the volume of atoms lost from the tip can only be inferred or examined after the fact, and the competing wear mechanisms, fracture and plastic deformation can’t be ruled out.

The Penn team’s breakthrough was to conduct AFM-style wear experiments inside of a transmission electron microscope, or TEM, which passes a beam of electrons through a sample (in this case, the nanoscale tip) to generate an image of the sample, magnified more than 100,000 times.

By modifying a commercial mechanical testing instrument that works inside a TEM, the researchers were able to slide a flat diamond surface against the silicon tip of an AFM probe. By putting the probe-cantilever assembly inside the TEM and running the wear experiment there, they were able to simultaneously measure the distance the tip slid, the force with which it contacted the diamond and the volume of atoms removed in each sliding interval.

“We can watch the whole process live to see what happens while the surfaces are in contact,” Jacobs said. “Then, after each pass, we use the TEM like a camera and take an even higher magnification picture of the tip. We can trace its outline and see how much volume has been lost, down to as small as 25 cubic nanometers, or about 1250 atoms.

“We are measuring changes in volume that are one thousand times smaller than can be seen using other techniques for wear detection.”

While this new microscopy method can’t image individual atoms moving from the silicon tip to the diamond punch, it enabled the researchers to see the atomic structure of the wearing tip well enough to rule out fracture and plastic deformation as the mechanism behind the tip’s wear. Proving that the silicon atoms from the tip were bonding to the diamond and then staying behind involved combining the visual and force data into a mathematical test.

“If atomic attrition is what’s happening,” Carpick said, “then the rate at which those bonds are formed and the dependence on contact stress — the force per unit area — is well-established science. That means we can apply chemical kinetics, or reaction rate theory, to the wear process.”

Now that they could measure the volume of atoms removed, the distance the tip slid and the force of the contact for each experimental test, the researchers could calculate the rate at which the silicon-diamond bonds form under different conditions and compare that to predictions based on reaction rate theory, a theory that is routinely used in chemistry.

“The more force the atoms are under, the more likely they are to form a bond with an atom on the opposing surface, so the wear rate should accelerate exponentially with additional stress,” Jacobs said. “Seeing that in the experimental data was a smoking gun. The trend in the data implies that we can predict the rate of wear of the tip, knowing only the stress levels in the contact, as long as this wear mechanism is dominant.”

For now, those predictions can only be made about the wear of silicon on diamond in a vacuum, though the selection of those two materials was not accidental. They are common in nanoscale devices and tools for nanomanufacturing.

The math behind the atomic attrition mechanism could eventually be applied in a fundamental way.

“The goal of this avenue of research is to get to the point where you tell me the materials in contact, and you tell me the period they are in contact and the stresses applied and I will be able to tell you the rate at which atoms will be removed,” Jacobs said.

“With a fundamental understanding of wear, you can cleverly design surfaces and choose materials to make longer lasting devices,” Carpick said.