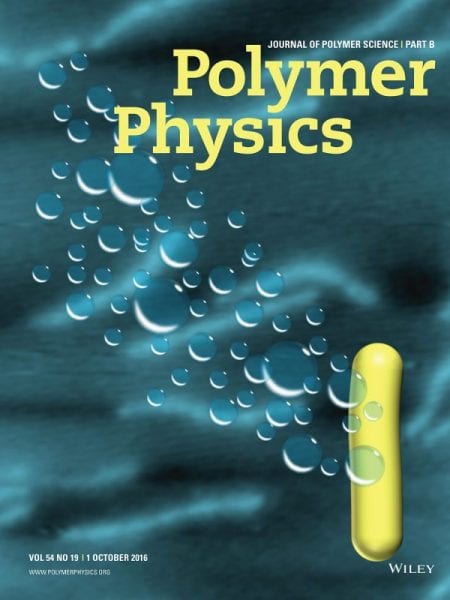 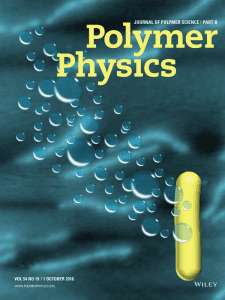 In a new article in the Journal of Polymer Science Part B: Polymer Physics, Satoshi Tsukuda and co-workers describe a size-controlled hydrogel nanowire based on poly(vinylpyrrolidone) and N,N’-methylenebis(acrylamide). Interestingly, the nanowires swell more in the radius and than in length. The nanowires have potential applications in sensing, drug delivery, and filtering.

The nanowires were formed from a crosslinking reaction using ion tracks via the so-called single nanoparticle fabrication technique. Ion tracks are heavy ions with high enough energy to pass through solid materials. The ions deposit along a cylindrical energy field, creating an ion track. This localized track allows for the precise distribution of radiation in straight lines. The radiation then catalyzed a crosslinking reaction to produce uniform nanowires.

Poly(vinylpyrrolidone) was dissolved alongside the crosslinker N,N’-methylenebis(acrylamide). Thin films of the solution were prepared by spin-coating. The films were then exposed to a 192Os30+ ion beam at the cyclotron accelerator facility of the Japan Atomic Energy Agency. Finally, the films were treated with water to remove any non-crosslinked polymer from the substrate, leaving behind the nanowires. The below image depicts AFM micrographs of the nanowires at different PVP/MBA ratios. 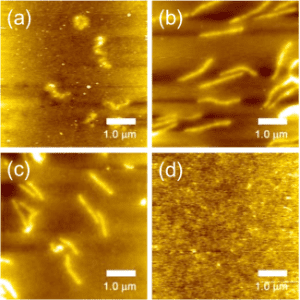 AFM micrographs of the hydrogel nanowires with varying crosslinker ratios.

The length of the nanowires depended on the film thickness, because the ion beam was able to penetrate through the entirety of the film. Though crosslinking was present throughout the film, crosslinks were distributed inhomogeneously. Crosslinks were dense in the center of the film, but sparse in the outer regions. This led the nanowires to swell more along the radial direction than along the length.

Uniform, size-controlled nanowires were formed from this technique, which could lead to applications in sensing, drug delivery, and filtering.