A Unified View of Dynamic Interfaces

Researchers from the University of Akron provide an early picture of a unified understanding of dynamic interfaces in nanostructured polymeric materials. 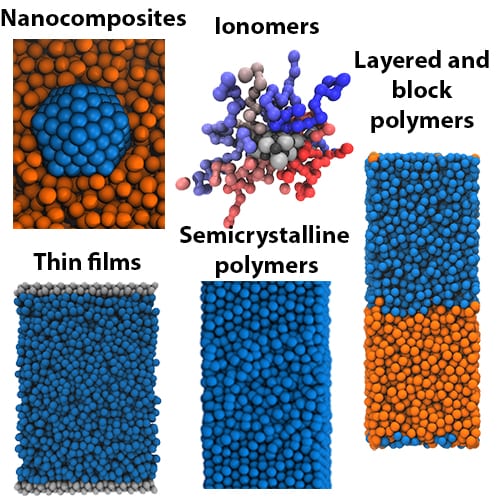 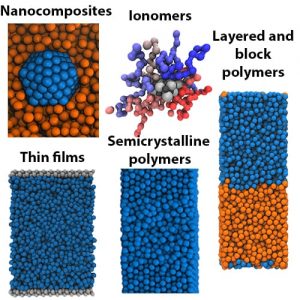 Over the last several decades, the continuous drive for improved material properties has led, across many applications, to the use of polymeric materials possessing nanoscale structure.

This convergent evolution of advanced materials development began in the early twentieth century with the introduction of carbon black nanoparticles to tire rubber. It has played a central role in the fabrication of ever-smaller transistors in the quest for continued Moore’s law improvements in computing speed. It lies at the cutting edge of new polymers for use in water purification and next-generation batteries. It has even made possible the extraordinary strength of the modern golf ball.

From a physics standpoint, these materials share one thing in common – much like the folded steel used to make ancient Samurai swords, their properties are dominated by interfaces.

These effects can be problematic, as in the collapse of polymeric nanoridges due to interface-driven softening. In other cases, they can be critical to materials performance.

This appears to be the case in filled tire rubber and structural ionomers used in golf balls and dental composites, where suppressions in molecular mobility around nanoparticles and ionic nanodomains, respectively, are believed to provide an important mechanical reinforcement effect. The impacts of these effects are numerous, for example playing roles in determining the properties of semicrystalline polymers and the permeability of membranes for water and air purification.

Despite these critical and diverse impacts, the mechanisms driving alterations in the properties of polymers in nanostructures and near interfaces have remained poorly understood.

What controls the magnitude and direction of shifts in the glass transition temperature of nanostructured materials?

Why is the apparent range of these effects – up to 100 nm – so much longer than the typical range of thermodynamic interfacial gradients?

Do near-interface alterations in dynamics have a universal origin, or do they obey different physics in systems as diverse as semicrystalline polymer, nanocomposites, thin films, and ionomers?

Researchers from the University of Akron provide an early picture of a unified understanding of these effects that has begun to emerge in recent years. The new understanding recasts interface effects in many classes of nanostructured materials that were previously viewed as distinct – thin films, filled rubbers, nanocomposites, block copolymers, nanolayered polymers, and ionomers – as instead representing specific instances of a more general physics of dynamic interphases in polymers and other glass-forming materials.

This view suggests that within all of these systems, the glass transition temperature and associated segmental relaxation time immediately adjacent to an interface shifts with a direct and magnitude that is controlled by the work of adhesion of the interface and the mismatch in high frequency moduli across the interface.

The distance over which these alterations propagate into the material is then controlled by the scale of cooperative segmental rearrangements, proposed by the theory of Adam and Gibbs to underlie dynamics in glass-forming liquids.

Finally, this framework highlights unique metrological challenges arising in nanostructured materials, where averaged quantities can reflect a nontrivial and metrology-dependent weighting over local gradients in structural and dynamics.