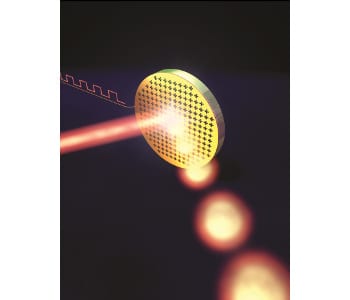 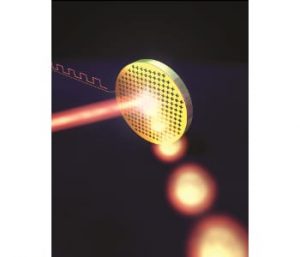 Plasmonic metasurfaces (thin composite materials with unusual optical responses) have generated widespread interest in recent years due to their ability to tailor light transmission and reflection over a subwavelength scale in unprecedented ways. In particular, many practical applications, such as beam steering, intensity modulation, and adaptive optics, would tremendously benefit from the development of metasurfaces in which the reflectivity is controlled in real-time and with high speeds by electrical signals.

A team of scientists at the University of Texas at Austin and the Technical University of Munich has designed an electrically reconfigurable optical metasurface by merging plasmonic metamaterials with semiconductor heterostructures. These researchers realized a 220-nanometer-thick electrically tunable mirror that can change its reflectivity in less than 10 nanoseconds in response to an applied electrical bias of a few volts.

The metamaterial consists of a stack of thin layers made of indium, aluminum, gallium and arsenic, sandwiched between a uniform layer of gold at the bottom and a pattern of inverted gold nanocrosses on the top. The thin semiconductor layers confine electrons into desired quantum states that change their configuration upon the application of a bias voltage and, as a result, they modify the reflectivity of the entire structure. Compared to previously demonstrated tunable metasurfaces based on the injection and extraction of electrons and holes, the structures demonstrated by the US–German team achieve optical tuning by electron wavefunction modification and associated electro-optic effects, without being limited by the carrier mobility. This approach may offer significant advantages in terms of ultimate modulation speed, with the potential of achieving switching speeds well below 1 nanosecond.