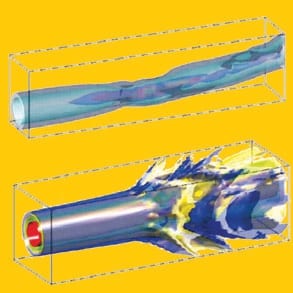 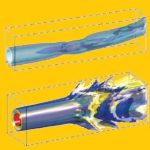 One of the simplest processes in nonlinear (NL) optics leading to a variety of complex physics phenomena is the mutual interaction of two counterpropagating (CP) optical beams in a medium, capable of nonlinearly changing the refractive index of the medium. The underlying geometry is conceptually very simple: two beams enter a finite medium from the opposite sides and, when they overlap by their evanescent fields, the beams start interacting via the mutual change of the optical refractive index. Numerous concepts in NL optics, such as phase conjugation, Bragg reflection by volume gratings, wave-mixing in photorefractive crystals, are based on this simple geometry. Nevertheless, this simple geometry can give rise to an extremely complicated and sometimes counterintuitive dynamical behavior, including both mutual beam self-trapping and the formation of stationary states, as well as complex spatiotemporal (ST) instabilities. It is for these reasons that CP beam configurations have achieved a paradigmatic role in NL physics of optical systems.

In addition to localized states or dissipative (cavity) solitons, which are stabilized due to the common action of gain, loss, nonlinearity and diffraction, the propagation and self-action of a single beam in a NL medium is also known to generate spatial solitons. Collisions between solitons are perhaps the most fascinating feature of soliton phenomena, because the interacting self-trapped wave packets exhibit many particle-like features. Solitons that propagate in the opposite directions enable a natural mechanism of soliton collisions, resulting from the strong interaction of the two beams. The CP solitons interfere and give rise to an effective grating.

A team of scientists from Texas A&M University at Qatar, the Institute of Physics in Belgrade (Serbia), the University of Münster (Germany), and the Australian National University in Canberra now give a review of the physics of counterpropagating optical beams and spatial optical solitons, including the formation of stationary states and spatiotemporal instabilities. They discuss several models describing the evolution and interactions between optical beams and spatial solitons that propagate in opposite directions in nonlinear media. They also show that coherent collisions between counterpropagating beams give rise to an interesting focusing mechanism resulting from the interference between the beams, and that interactions between such beams are insensitive to the relative phase between them.

In addition, the authors report about recent experimental observations of the counterpropagation effects and instabilities in waveguides and bulk geometries, as well as in one- and two-dimensional photonic lattices. They summarize a variety of different generalizations of this concept, including the counterpropagating beams of complex structures, such as multipole beams and optical vortices, as well as the beams in different media, such as photorefractive materials and liquid crystals.