Two Decades of Dendrimers as Versatile MRI Agents: A Tale with and without Metals

A vast number of metallic and non-metallic labels can be conjugated to the dendrimer surface in order to transform them into MRI agents. Due to their multiple branches and high payload they can be readily detected, for example, following local delivery to a brain tumor.

In their recent Focus Article in WIREs Nanomedicine and Nanobiotechnology, “Two decades of dendrimers as versatile MRI agents: a tale with and without metals,” Drs. Michael McMahon and Jeff Bulte chronicle the use of dendrimers as carriers for MRI (contrast) agents. Two decades ago, these nanomaterials served as a branched polymeric backbone to support hundreds if not thousands of paramagnetic chelates linked to a single dendrimer molecule, greatly increasing the sensitivity of the first generations of MRI contrast agents. Since then, new MRI techniques have been implemented that do not rely on metal ions to alter the MRI signal, including 19F “hot spot” heteronuclear MRI and chemical exchange saturation transfer MRI, which offers advantages in terms of safety profiles if long blood half-live circulation times are present, as is the case for higher generation dendrimers. 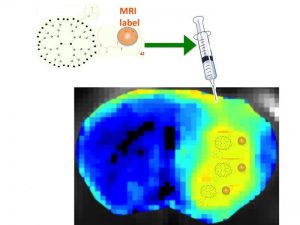 A host of MRI applications for dendrimers have now been recognized by the international biomedical imaging community, which includes their use as blood pool and lymph node imaging agents, tumor-targeted theranostic (i.e., combined diagnostic and therapeutic) agents, and cell tracking agents.  Virtually any material that can provide MR contrast has now been incorporated into dendrimers and evaluated in preclinical animal models. However, only one dendritic agent has made it into the clinic so far. Overall, detailed toxicity studies have been lacking, and thorough side-by-side biodistribution studies comparing different dendritic core compositions, generation sizes, and terminal groups have been few. This detailed review covers the 400 some papers published on dendrimers and MRI over the years, with particular emphasis on the advantages and disadvantages of the different classes of dendritic MRI agents.