Three-dimensional deterministic aperiodic structures are realized for the first time and studied with respect to their optical properties. 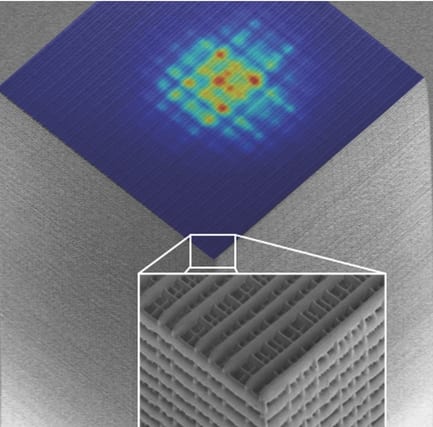 While the properties of periodic photonic crystals are well understood, little to none is known about the optical properties of three-dimensional deterministic aperiodic structures which are forming a class of matter on their own, situated in between ordered and perfectly disordered systems. Distinct transport properties as well as localization effects might be studied on this kind of structures.

Thanks to the technological progress in direct laser writing Michael Renner and Georg von Freymann (University of Kaiserslautern) were able to fabricate 3D high-quality structures of substantial size, an essential requirement for a meaningful study of deterministic aperiodic systems.

In Advanced Optical Materials they present the first realization and comparative study of the optical properties of such three‑dimensional deterministic aperiodic structures.

The experimental techniques presented in their work will pave the way to future experiments answering long-standing questions concerning topics such as the scaling behavior with system size, the transport mechanism at increased refractive index contrasts and nonlinear effects.