The majority of the developed bio-systems based on 2D transition metal dichalcogenides are reviewed in Small. 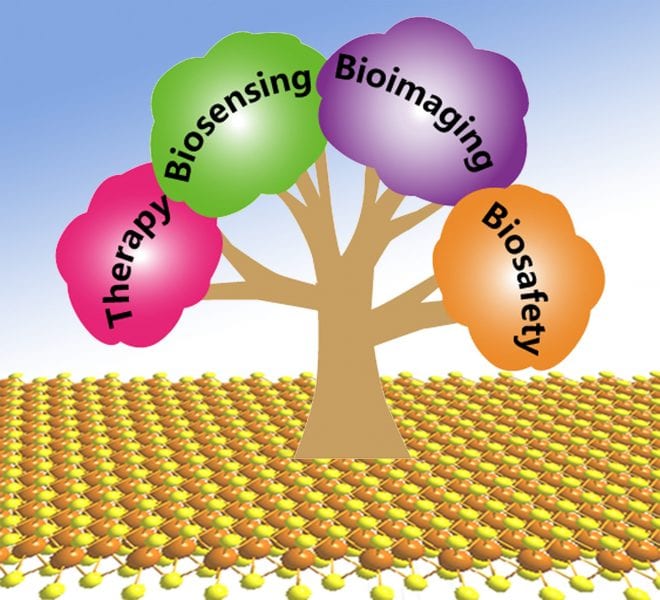 Two dimensional transition metal dichalcogenides (2D TMDs) have finally escaped the heavy shadow of graphene. At the start of this decade, some of their fascinating properties were recognised, which catapulted them into favourite positions amongst researchers. Fundamentally, 2D TMDs offer a very different world than that of graphene. Graphene is an atomically thin layer of carbons that are covalently bound together across a plane, while 2D TMDs are made of fundamental layers that with a thickness consists of a transition metal sandwiched between S, Se, and Te chalcogenides.

2D TMDs are particularly useful in being incorporated in bio-systems. Depending on the choice of transition metal and chalcogen, the TMD plane can show metallic, semiconducting or insulating properties for developing any type of functional system needed. Many of the chalcogen-basal ended compounds are naturally stable in oxygen-containing and aqueous environments, which make them suitable for liquid media applications. Different from graphene, electrons in 2D TMDs are massive. Semiconducting 2D TMDs have a natural bandgap, which is great for developing functional devices such as biosensors. The bandgap also leads to optical properties such as photoluminesce that can be used as the base for imaging, tracking, and biosensing.

Many 2D TMDs are naturally less hazardous and toxic than other nanoparticles. They can interact in peculiar ways with live cells and enzymes, which makes them very interesting for specific applications. 2D TMDs have large surface areas to absorb charged particles, or thin layered morphologies can be efficiently intercalated. They are also responsive to environmental signals. These mean than they can be used for storing and releasing drugs on demand. They can be used as electrochemical biosensors and many more.

2D TMDs contain heavy metals that make them specifically applicable to CT imaging and photothermal manipulations. These materials, at an odd number of layers, lose their cytosymmetry to become piezoelectric and as such, they can be vibrated to absorb mechanical and IR heat. They can also be used as the tiniest membranes for mass sensing.

Despite the fact that many of the bio applications for 2D TMDs have been investigated, 2D TMDs still remain relatively unexplored for their fascinating capabilities in bio-systems. There are a few papers regarding their interactions, absorptions and tracking within live cells. However, still no in-depth investigation regarding the fundamentals of their interactions with cell organelles have been conducted. There are still many disagreements regarding their toxicity. It is still not known whether the extraordinary sensitivity of these 2D materials stems from their electronic properties, or whether piezoelectricity also plays a role. There are only a few papers regarding their plasmonic properties in biosensing and if successfully explored they can potentially become the first successful avenue for bio plasmonic applications due to their high Q. More importantly, the efforts on surface modification  of 2D TMDs should be expanded to discover novel methods for bio functionalisation of the basal surface, corners and edges.

Another important issue which is generally ignored is the relationship between the synthesis parameters and bio applications of 2D TMDs; especially for liquid phase applications, which is the base of biosystems, the lateral dimensions, basal and edges properties are of utmost importance. These parameters should be finely tuned with reference to the target bioapplications in order to lead to success.

In this review paper entitled “Recent advances in synthesis and biomedical applications of two-dimensional transition metal dichalcogenide nanosheets”, the authors carefully analysed a majority of the so far developed bio-systems based on 2D TMDs. They have presented the advances in the bio field and explained how these materials have been efficiently used in each application. There are also informative discussions on possible future discoveries and explorations in the field. One thing that separates this review from those similar past manuscripts is the emphasis on the synthesis of 2D TMDs in the context of bio applications.

All in all, such a review is of great importance for revealing the importance of the nascent field of bio 2D TMDs. The field has a great potential and deserves strong future investment to lead to important commercial and industrial applications. 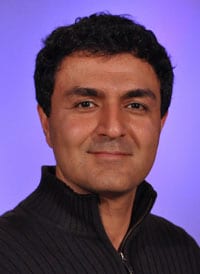 This invited highlight text was provided by Kourosh Kalantar-zadeh, a Distinguished Professor and the Director of the Centre for Advanced Electronics and Sensors (CADES) at RMIT University, Australia. He received his B.Sc. (1993) and M.Sc. (1997) degrees from Sharif University of Technology, Iran, and Tehran University, Iran, respectively, and his Ph.D. from RMIT University, Australia (2002). His research interests include chemical and biochemical sensors, nanotechnology, microsystems, materials science, electronics, gastroenterology, medical devices and microfluidics.