Tougher than tough: borate that expands under pressure

Scientists in China discover an unusual material that can expand, instead of shrinking, against external pressure. 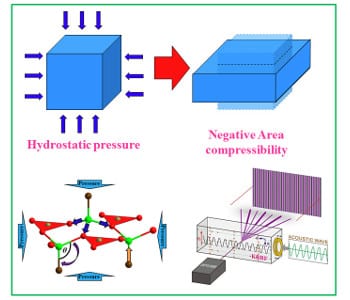 Common sense tells that an object will always shrink in all three dimensions when it is subject to an increased hydrostatic pressure. However, as counterintuitive as it may sound, there do indeed exist such materials, albeit rather rare, that can expand along two directions even when a compressive force is applied to all three dimensions. This novel mechanical behavior, termed as negative area compressibility (NAC), while challenging our sense of the basic laws of physics, actually shows interesting potentials in many scientific and technical fields, such as ultra-sensitive pressure sensors, optical telecommunication, shock absorbing materials, and even novel body armors – imagine Tony Stark comes back with one in Iron Man 4. However, up until now, only six materials, four organic and two inorganic, have been found to possess NAC. 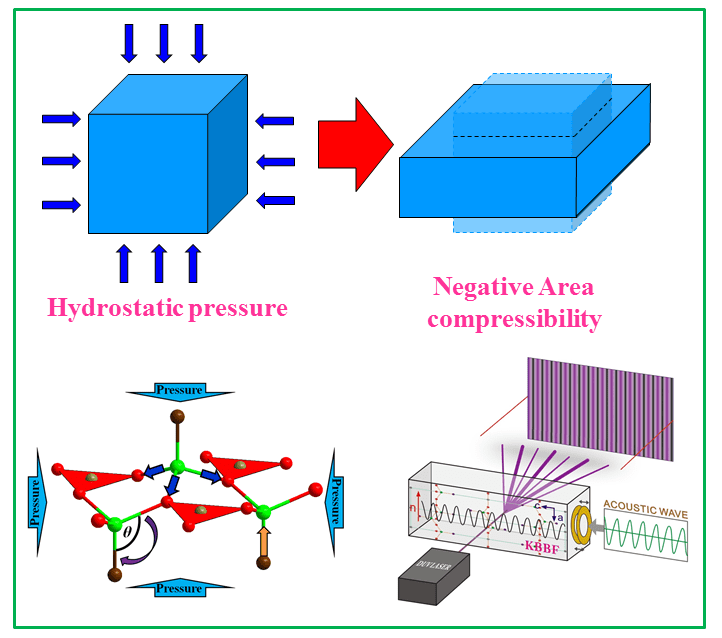 Now, Zheshuai Lin, Xingxing Jiang at Technical Institute of Physics and Chemistry, Chinese Academy of Sciences (Beijing), collaborating with Wei Li at Huazhong University of Science and Technology (Wuhan) and co-workers, reveal the NAC property in potassium beryllium fluoroborate (KBBF) by high-pressure synchrotron powder X-ray diffraction experiments combined with first-principles calculations, adding a new member to the small family of materials.
The NAC behavior often originates from the strongly anisotropic atomic arrangements in the microscopic structure. For a long time, borates have been extensively studied mainly due to their excellent optical properties, especially large nonlinear optical (NLO) effects, in the ultraviolet (UV, wavelength < 400 nm) and deep-UV (wavelength < 200 nm) regions, corresponding to strong anisotropy in their crystal structures. In particular, as a deep-UV NLO material, KBBF features very anisotropic structure: its framework is built by two dimensional infinite anionic layers that are perpendicular to the c-axis.
The researchers find that KBBF exhibits a NAC behavior over a pressure range from 0.22 to 6.39 GPa, by far the broadest among all known NAC materials. Moreover, the NAC behavior is completely isotropic in the ab plane due to the uniaxial crystal symmetry. The mechanism analysis reveals that the significant shrinkage of the ‘soft’ Be-F bond along the c-axis, when hydrostatically compressed, results in the orthogonal expansion of the O3 plane in the (BeO3F)5- tetrahedra, giving rise to NAC along the ab plane.
The present findings make KBBF the first completely isotropic NAC material that can transmit deep-UV light. In addition to the NAC effect, the authors have also predicted for KBBF extremely large Poisson’s ratios and very high acoustic-optical figure of merit. Its very large bandgap allows KBBF to find applications as the strain-converting material used in intrinsic fiber Fabry-Perot interferometer pressure sensor with ultra-fine pressure-sensing sensitivity or as the excellent acoustic-optics diffracting devices in the high-precision ultrasonically driven deep-UV light modulators and scanners.
“The future work concerning the new function in KBBF will greatly expand its applications beyond a NLO crystal”, as envisioned by Lin, the lead author of this report. He further comments that “in fact, the boron atoms can be either three- or four-coordinated with oxygen atoms to form BO3 triangles or BO4 tetrahedra, which can further construct the fundamental building blocks with extremely large structural diversity and result in various interesting properties.” The present study revives the studies on new functionalities in borates, which have been long overlooked, and may eventually lead to discoveries of more exciting and exotic emerging physical properties.