Researchers develop a liquid crystalline elastomer robot fueled completely by visible light. The robot is capable of biomimetic locomotion resembling a caterpillar and can be operated directly on human skin. 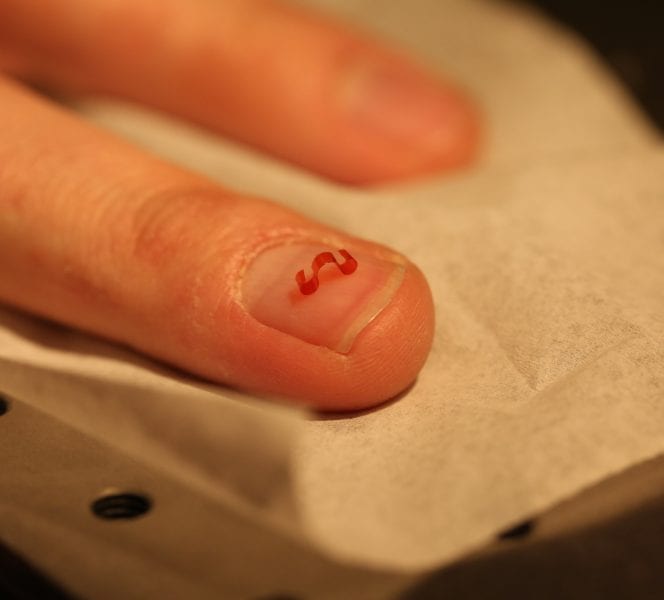 In a recent article in Macromolecular Rapid Communications, researchers from Tampere University of Technology (Finland) and University of Warsaw (Poland) introduce a miniature robot capable of biomimetic locomotion. This “Ω”-shaped caterpillar robot is fueled completely by visible light and can be operated in close proximity to humans, or even directly on human skin.

One of the researchers, Professor Arri Priimagi (Tampere University), elaborates on this challenge:

“Moving from photoactuation (deformation) to locomotion (mobility) requires a distinct robot design. Most of the light-responsive actuators reported to date can deform, but are not mobile—in other words, there’s no transfer of momentum into the device needed to cause locomotion.”

The few photomobile walking robots reported to date rely on UV light or a high-powered visible laser to induce actuation. The authors instead use a visible LED light source with moderate intensity to drive the robot, which operates under a photothermal (as opposed to photochemical) effect for the actuation.

To fabricate the light-sensitive device, the authors used alignment patterning combined with anisotropic thermal expansion of the polymer. The robot reversibly changes its body length from 8 to 14 mm upon light illumination, successfully mimicking the inching gait of the caterpillar.

Priimagi reveals that their next challenge is to introduce a controllable friction switch into the miniature robot geometry. If successful, a light beam can not only power the robot but also drive the direction of movement.

“Just as caterpillars morph into butterflies, perhaps the soft robotics of the future will translate from inching movement into flying.”