A new physical approach to the design of intelligent memory, logic, and cognitive devices for brain-like computation. 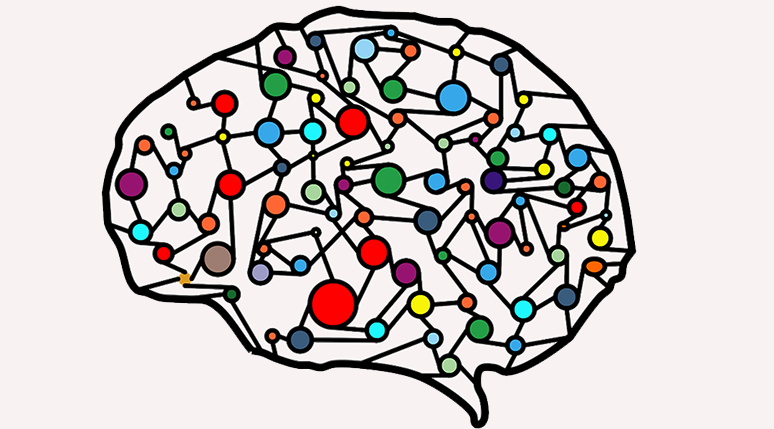 Emulation of the synaptic structure, neurotransmission process, and ensuing synaptic function is essential for the realization of intelligent brain-like computing. Inspired by the brain, several two-terminal ionic memristors have been proposed as artificial synapses. In most realizations, however, the physical mechanism producing the synaptic response differs substantially from the synaptic neurotransmission process whereby the release and bonding of neurotransmitters by two different entities (the pre- and postsynaptic membranes) modify the membrane potential.

Recently, physical realizations that emulate the dynamics or electrochemistry of biological processes have been investigated more closely to further advance the implementation of neuromorphic computing hardware. For example, the dynamics of Ca2+ in pre- and postsynaptic compartments has been successfully reproduced by second-order drift memristors based on oxide bilayers and Ag nanocrystals, and artificial neurons with stochastic leaky integrate-and-fire dynamics have been realized using Ag nanoparticles in a dielectric film. Research activities on artificial synapses and neurons with biorealistic transport dynamics are motivated by a substantial reduction in footprint, complexity, and energy consumption, as well as an improved emulation of brain functions. 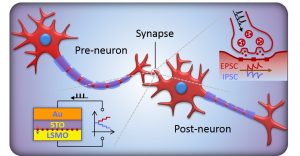 In a recent paper published in Advanced Intelligent Systems, Hongwei Tan, Sebastiaan van Dijken, and their colleagues at Aalto University report an alternative implementation of a biorealistic artificial synapse. Their approach is based on oxygen vacancy migration in tunnel junction memristors with a thin oxide tunnel barrier (SrTiO3) and one conducting oxide electrode (La2/3Sr1/3MnO3). They show that reversible migration of oxygen vacancies across the tunnel barrier interface changes the barrier potential and, thereby, the tunneling current, a process that closely mimics the release and bonding of neurotransmitters in a biological synapse and resulting changes of the postsynaptic current. It was demonstrated that the developed devices emulate the quantal, stochastic, and excitatory or inhibitory characteristics of neurotransmitter release. Finally, it was shown that the tunnel junction memristors use small tunneling currents, which enables low-power operation.

The results of this study offer a new physical approach to the design of intelligent memory, logic, and cognitive devices for brain-like computation.

“Our results showcase that the release and bonding of neurotransmitters in a biological synapse and resulting changes of the postsynaptic current are accurately mimicked by oxygen vacancy transport in an oxide tunnel junction memristor and ensuing changes of the tunneling current”, said Hongwei Tan, a postdoctoral researcher at Aalto University and the lead author of this paper.

"Evolvable" synaptic transistors push the edge of neuromorphic computing
Metamaterial Improves Solar Cells
AI for drug discovery: What can we do?
CO2 photocatalysis sees the light of day