Batteries from a variety of manufacturers are examined using high-speed X-ray imaging to determine their failure mechanisms during thermal runaway. 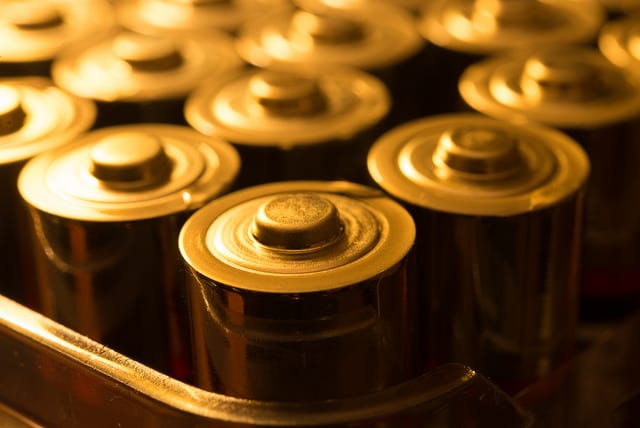 A ‘thermal runaway event’ is the official term referring to the positive feedback loop created when an increase in temperature sets the conditions for further irreversible temperature increases. In other words, something causes things to start heating up, and it just keeps getting hotter.

In the case of lithium ion batteries, it was recently observed to lead to lithium battery fires, as per the memorable failures of many Samsung Galaxy Note 7 devices in 2016. Lithium is susceptible to side-reactions and its deposition on the battery electrode can be uneven, causing dendrite formation that at best reduces the battery’s working life and at worst exacerbates the conditions for such spectacular safety issues.

If the battery is deformed or overheated, for example, thermal runaway becomes a probable result. 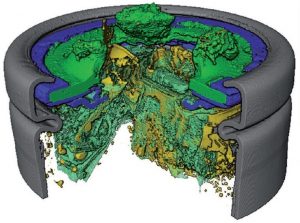 Post-mortem reconstruction of a cell with damage to its top button after thermal runaway.

During thermal runaway events, a build-up of gases is generated by electrochemical reactions. When this build-up is not properly vented, it can cause rupture of the battery, exposing the battery components and presenting an additional danger to the user.

There are several research groups tackling the root problems, but one practical-minded team collaborating between the UK, USA, and France is looking instead into its containment. “With increasing [battery] capacity, the rate and quantity of heat and gas generated during failure of the cells are also expected to rise,” say the authors of the study. They simply assumed that thermal runaway would happen, and explored how its effects could be mitigated to achieve a safer outcome.

Their first task was to identify the multistep failure mechanisms of different battery systems from various manufacturers. They selected the common 18650 cell and used high-speed X-ray imaging and computed tomography to examine its physical response to the heat and gas output caused by thermal runaway.

Seven out of the sixteen battery models tested ended in uncontained failure. The failures were catalogued according to the outcome, ranging from the ideal situation (‘Contained’) to the cell completely rupturing and releasing its components to its surroundings (‘Burst’). 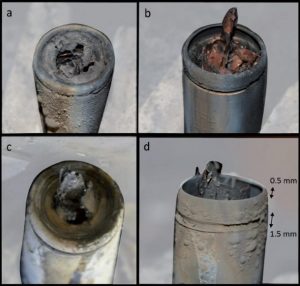 Post-mortem images of batteries that failed via bursting, mandrel piercing, or melting of the top button.

While their rigid outer casings turn overheated batteries into pressure chambers, they are typically built with a single vent designed to relieve this pressure in a controlled way. It was discovered, however, that the release of gas at high speeds could lead to a dangerous shifting of the mandrel, the physical central support for the battery and the vector via which materials are funneled out of the vent. Particularly in cases of higher capacity, however, the mandrel itself ended up being the cause of rupture, piercing the battery’s top button and even becoming a projectile.

The recommendations of these researchers was to fix the mandrel to the bottom plate of the battery, or to present a flat end to the vent, to reduce the chance of puncture. They also took a look at the influence of having a second vent. Their conclusions are freely available for you to read in Advanced Science.