Encapsulated metal nanoparticles can be extracted from carbon nanotubes through reverse capillary action. 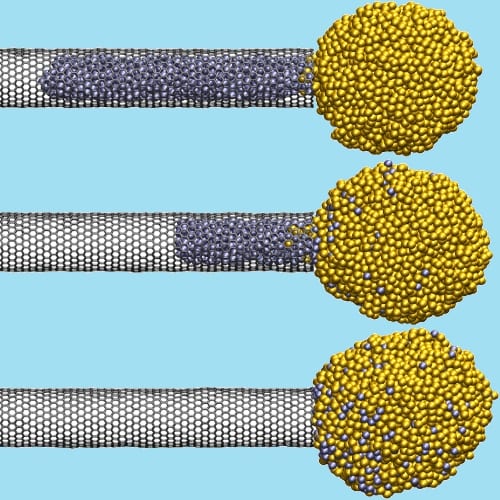 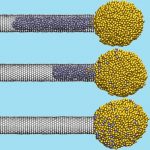 Encapsulated metal nanoparticles can be extracted from carbon nanotubes through reverse capillary action.

It helps plants to transport water from their roots to their leaves. It is the reason why a sponge can be used for cleaning. It allows for the separation of different substances by chromatographic techniques like thin layer chromatography. Capillarity is the fundament of many biological and physical processes. However, this phenomenon is relevant not only on the macroscopic scale; with an increasing interest in nanofluidic devices, the effects of capillarity on the nanoscale have become an important topic, too. Possible applications of nanofluidic devices include promising areas like the separation of biomolecules, single-molecule analysis, or drug-delivery systems, and it is crucial to understand if the balance of capillary forces on the nanoscale resembles the one in the bulk material. Kirsten Edgar et al. from Wellington, New Zealand, now demonstrated for the first time that it is possible to withdraw an encapsulated metal particle from a multi-walled carbon nanotube via reverse capillary action, a fact that could make carbon nanotubes suitable for the use as pipettes.

Carbon nanotubes present an ideal material to study nanoscale capillarity – they are among the smallest capillaries currently known, and they can absorb particles of even non-wetting metals if the Laplace pressure of the free droplet exceeds its meniscus pressure in the nanotube. But then shouldn´t it also be possible to extract an encapsulated particle if, the other way around, its meniscus pressure is higher than its Laplace pressure? The New Zealand research group gave it a try with silver-filled multi-walled carbon nanotubes: They chopped the ends of the nanotubes off using a silver-assisted oxidation method by which, simultaneously, silver nanoparticles were produced. The opened nanotubes then absorbed those silver particles that were small enough while the larger particles remained dispersed in the sample randomly – and larger particles that abutted on the open end of a metal-filled nanotube actually started to extract the internal particle. This process could be observed via electron microscopy: Within two minutes, an encapsulated particle was released completely from the nanotube and absorbed by the large particle, leaving the walls of the nanotube partially collapsed.

Molecular dynamics simulations for a liquid silver particle supported the experimental observations: an encapsulated metal droplet will be released from a carbon nanotube if the external particle has at least twice the radius of the droplet. However, unlike in the experiment, the simulated droplet did not shrink in diameter during extraction and the nanotube walls remained unaffected, indicating that the dynamics of the experimental process might differ from those in the model. Still, the results from the simulations and the experiments confirm that the ratio of a particle´s Laplace pressure and meniscus pressure determine if it will be absorbed or released from a capillary, showing that carbon nanotubes indeed could be applied as nanopipettes one day.