The Sound of Smallness

Researchers from the Massachusetts Institute of Technology, USA have introduced a simple strategy for making nanoparticles by the sonofragmentation of high‐aspect‐ratio 1D substrates. 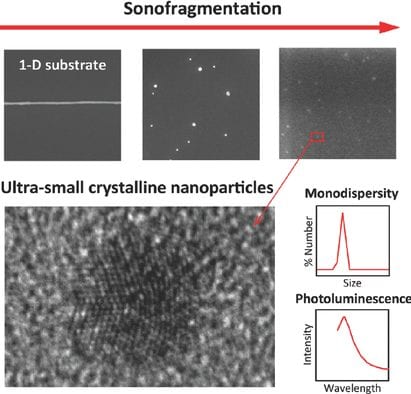 Small (<10 nm) nanoparticles (NPs) are important because of the unique physical and chemical properties that arise due to their small size and large surface area, and several methods have been developed to produce them. Top‐down synthesis methods that rely on breaking down bulk materials into smaller fragments can be deployed at scale but often struggle with monodispersity and with a low yield for small NPs. Bottom‐up synthesis on the other hand can effectively assemble small molecule precursors into larger units to create small NPs. However, both methods require harsh chemicals or specialized equipment, out of reach from many end users.

Now, Edward Boyden and colleagues from the Massachusetts Institute of Technology, USA have introduced a simple strategy for making nanoparticles by the sonofragmentation of high‐aspect‐ratio 1D substrates. Using common laboratory equipment, ultrathin nanowires are fragmented into nanoparticles of a size determined by the nanowire width, resulting within hours in monodisperse, crystalline nanoparticles of <10 nm.

Ultrasonication can be used to break down nanowires into shorter nanowires, and nanotubes into shorter nanotubes so the researchers hypothesized that by choosing nanowires of high aspect ratio, and then applying ultrasonication, it would be possible to perform top‐down synthesis of many kinds of NPs in effectively a single step (see Figure). The final yield of the NP synthesis is limited only by the supply of the starting materials, and with a constant supply of the nanowires, the method would enables the production of ultrasmall NPs in large quantities.