A new protocol combines gold nanoparticles with an enzyme substrate to give a simple test for the activity of an enzyme, the results of which can be seen with the naked eye. 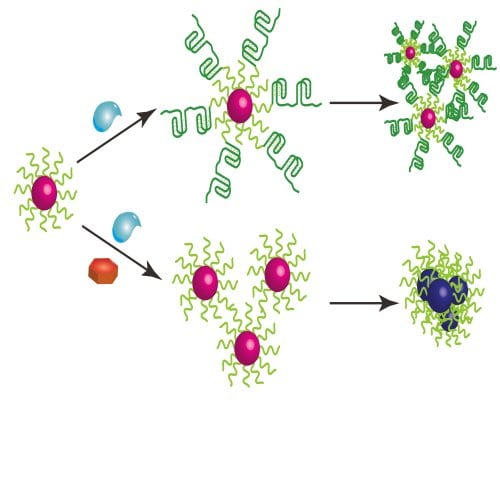 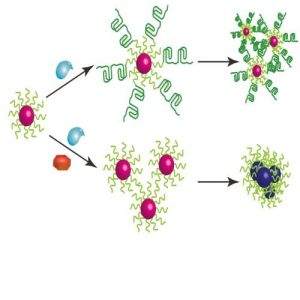 Can you see just by looking whether or not an active enzyme is present in a sample? This is exactly what Chinese scientists have done by using a new protocol that combines gold nanoparticles with an enzyme substrate to give a simple test for the activity of an enzyme, the results of which can be seen with the naked eye.

Human telomerase is an enzyme that catalyzes the addition of protective repeat units of DNA known as telomeres onto the human chromosome. This enzyme is overexpressed in over 85% of tumors, so it can act as a clear biomarker for the presence of a tumor, and it is already used in this way for diagnosis. However, the main current detection method for human telomerase involves amplification of the DNA by polymerase chain reaction (PCR), which carries with it an inherent possibility to produce artifacts. Other methods that have been used are either unsuitable for high-throughput procedures, relatively insensitive, or require complicated equipment to perform and read-out.

Now, researchers from the Chinese Academy of Sciences at Changchun Institute of Applied Chemistry, China, led by Xiaogang Qu have developed a new, easy-to-perform method to detect activity of human telomerase rapidly and at low concentrations of the enzyme.

Their method uses gold nanoparticles and is based on the fact that the usual substrate for telomerase is an oligonucleotide which, when attached to the surface of a gold nanoparticle, will fold in such a way to prevent aggregation of the particles. Addition or presence of the telomerase enzyme causes the substrate to cleave from the nanoparticle, which alters the aggregation of the particles. This change in aggregation then causes a color change in the solution that is visible with the naked eye when the concentration of cells is high enough, or can be measured using a UV-Vis spectrophotometer down to a concentration of a single HeLa cell per microliter.

The color change means that no complicated equipment is required to read-out the test result, and the whole analysis can be completed in a very short amount of time, unlike methods that work via PCR. All of this, combined with the relatively low cost of the test, means that it could easily be used in a high-throughput situation to test many samples quickly. As well as diagnosis of cancers, the authors have also tested their method as a way to screen for telomerase inhibitors that could act as possible anticancer drugs, so this work should be of great interest to scientists working in drug development as well as to medics both in the field and the laboratory.