Nanostructured sensor for the detection of very low concentrations of explosive. 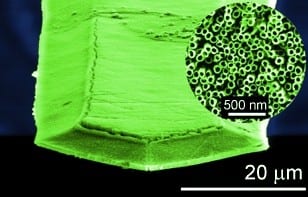 To prevent terrorist attacks at airports, it would be helpful to detect extremely low concentrations of explosives easily and reliably. Despite the development of various sensor technologies, dogs continue to be the most efficient detectors. In new research, a German and French team describe a type of micromechanical sensor with a structure derived from the sense organs of butterflies.

One approach used for sensors is based on microcantilevers. These are tiny flexible cantilevers like those used to scan surfaces with atomic force microscopes. When used in “chemical noses” the microcantilivers are coated with a material that specifically binds to the analytes being detected. Cantilevers can vibrate like springs. When analyte molecules are bound to a microcantilever, its mass changes along with its frequency of vibration. This change can be measured.

Because of their very low vapor pressure at room temperature, the highly sensitive, reliable detection of explosives remains a big challenge. In order to make microcantilevers more sensitive to the explosive trinitrotoluene (TNT), research groups led by Denis Spitzer at the French-German Research Institute of Saint Louis and Valérie Keller at the Laboratoire des Matériaux, Surfaces et Procédés pour la Catalyse in Strasbourg have now taken inspiration from the highly sensitive sense organ of some types of butterfly. Male silk moths use this organ to recognize pheromone molecules excreted by females as they land on its broad antennae. These antennae are covered with sensilla, which are porous hairs containing chemonsensing neurons.

The scientists equipped their microcantilevers like the butterfly antennae. They coated them with a dense three-dimensionally ordered layer of titanium dioxide nanotubes oriented vertically, like the butterfly sensilla. This has several advantages: the specific surface of the microcantilevers is significantly increased; titanium dioxide binds well to substances that contain nitro groups, which are characteristic of TNT and other explosives; also, the tubes have an open structure, which improves the movement of mass and ensures a rapid sensor response.

The tubes are about 1700 nm long and have an outer diameter of about 100 nm and a wall thickness of 20 nm. Each cantilever holds about 500,000 of these nanotubes.

For test purposes, the researchers vaporized TNA by heating a tiny crystal. The sensor was able to detect concentrations of less than one part per trillion (ppt) within 3 minutes. The researchers are now working on building a selective detector system for explosives or other gases based on this method.

Mystery solved: The origin of the colors in the first color photographs
Stretchable and Waterproof Wearable Electronics
The Success of Plasma for Microfabrication in Electronics
Toward a Universal Influenza Vaccine