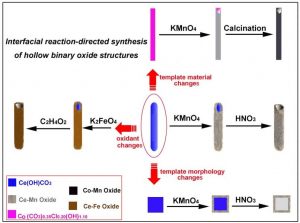 Schematic illustration of the synthesis of hollow binary oxide nanostructures.

Binary metal oxide nanotubes are an important emerging class of materials because of their potential applications in many fields such as catalysis and ferroelectrics. Although template-assisted synthesis based on interfacial reaction is one of the most effective approaches for preparing hollow, single metal oxide (MOx) structures, this method is rarely employed for the synthesis of hollow binary metal oxide (M1-M2Ox) structures. Now, a new, simple avenue for the general synthesis of hollow structured binary oxide has been reported by Guozhu Chen, Federico Rosei, and Dongling Ma from the Institut National de la Recherche Scientifique in Montreal, Canada.

HAADF-STEM image (a) and STEM-EDX maps (b-d) of an Ce-MnOx nanotube.

Thanks to the mild synthesis conditions, the group believe it should be possible to scale up the procedure. They also envision that this method could be easily extended to fabricate other hollow binary oxide nanocomposites by choosing suitable templates and oxidation/reduction pairs.