Surviving in the Wild with Silk: Collecting Water with Nanostructured Nylon

Scientists make artificial spider silk from polymer-coated nylon, which can collect water from the atmosphere with astonishing efficiency. 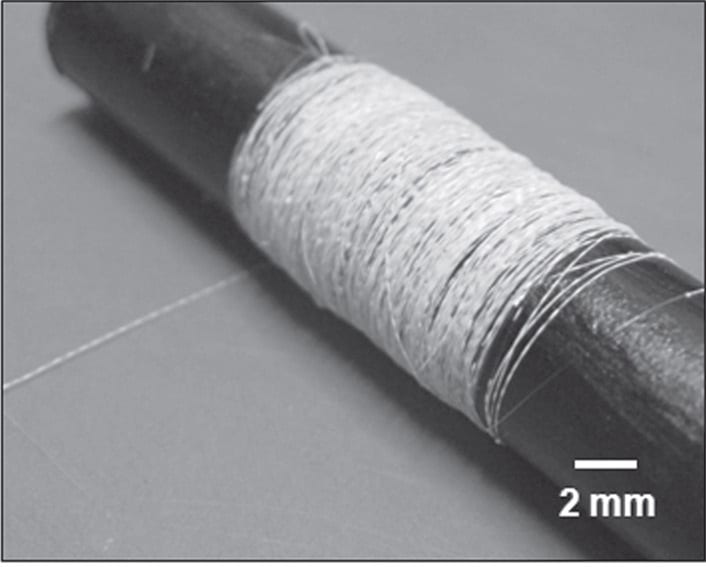 A close up look at the nylon-PMMA fibers after fabrication - note the regular spindle knots, essential for the fibers' water collecting ability.

The creatures of nature are like masters to us; full of lessons we can learn. Many of the great breakthroughs of humankind – particular those based on designing novel structures or systems – come from detailed observation of animals, insects, or plants. Right now, for example, medical adhesives involving glue and tiny nano-hairs are being developed based on the surface patterning of gecko feet. In order to reproduce the desired features from natural creatures, however, scientists and researchers need substantially more solid knowledge of the science of these systems.

Now, more novel bio-inspired material research has been reported by a group from the Chinese mainland. The scientists from the Chinese Academy of Science Institute of Chemistry, the National Center for Nanoscience and Technology, Beihang University, and Jinlin Univeristy have collaborated closely to develop next-generation artificial ‘spider silk’, which they believe can be used for water collection in drought-stricken regions.

Previous attempts by this team to create water-collecting fibers were limited by the dip-coating method used to create them; in their latest work, they have adopted a fluid-coating method, which was used to continuously fabricate the fibers on a large scale. By tuning the deposition conditions, the researchers could create “spindle knots”, analogous with structures found on spider webs in nature, and with directional water-collecting capabilities.

The fibers themselves are composed of nylon, which was fixed horizontally through a capillary tube and attached to a rolling motor. As the nylon moved through the tube, PMMA (polymethyl methacrylate) was deposited onto it, and, by careful control of the speed of progress of the nylon, the characteristic knot structures could be formed.

The water collection capacity in fog for these newly developed bio-inspired fibers is twice that of natural spider silk under the same conditions. Such a scenario is reminiscent of an old Chinese proverb: the waves in front are pushed by the waves that follow in the Yangtze River, and the old faces are pushed out by the new faces in society.

However, research in this area is by no means complete – many problems still need to be carefully addressed. The authors suggest that a comprehensive investigation on natural spider silk should be undertaken – in particular, on its fiber radius, surface structure, and chemical composition – in order to optimize their fibers for commercial production. Perhaps in the future, when you prepare your next expedition into the unknown, you will be well advised to include some ultra-light, man-made spider silk in your backpack, to acquire water directly from nature.