Vladimir P. Drachev has studied a uniaxial hyperbolic metamaterial for its use in optical communications systems. 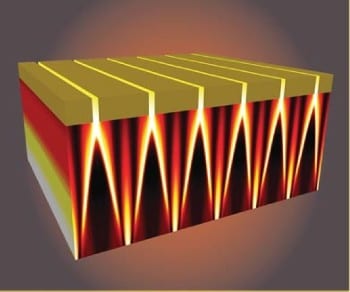 Electromagnetic wave propagation in a uniaxial hyperbolic metamaterial evokes so called volume plasmon polaritons. Their interference leads to sub-wavelength patterns which could be used for nanophotolithography.

Motivated by the problem of wave propagation in a plasma of electrons and ions under the influence of a magnetic field, and in particular, radio waves in the Earth’s ionosphere, in the 50’s and 60’s, electromagnetic wave propagation in a special type of anisotropic media with hyperbolic dispersion has been investigated intensely. Inside of such a hyperbolic medium, the principal components of the permittivity tensor have opposite signs causing the medium to exhibit a ‘metallic’ type of response to light waves in one direction, and a ‘dielectric’ response in the other.

Along with the anisotropic plasmas, stratified artificial materials were studied for applications in transmission lines. The fact that a broad spatial spectrum, including waves with a large wave-vector, can propagate in a hyperbolic media along one direction has been used to achieve extremely high spatial resolution. This property of hyperbolic materials, when used as an immersion lens, has been coined a “hyperlens”.

Vladimir P. Drachev, of Purdue University in West Lafayette, USA, now studied a uniaxial hyperbolic metamaterial – a lamellar metal-dielectric structure made of many thin planar layers of a metal and a dielectric, silver and silica – in a regime that allows for the observation of the interference between two spatially-confined transverse-magnetic waves propagating across the metal-dielectric interfaces.

In a photolithography experiment, an interference of two VPPs from the double-slit was shown to result in a sub-wavelength pattern at the output interface, which is six times smaller than the free space wavelength at 465 nm. This is in sharp contrast to the double-slit experiment in silica, which results in a diffraction-limited pattern.

The hyperbolic material properties tend to be closer to the target effective parameters as the layering-period is decreased, providing potential pattern sizes of 22 nm. Such unique subwavelength interference patterns offered by hyperbolic metamaterials allow for a range of applications in nanophotonics. Drachev and his colleagues demonstrated a route to photolithography in their study. Another application field is sub-wavelength optical probe for sensing.