Silica-coated gold nanorods with absorption at precisely 780 nm cause action potentials in nerve cells when exposed to laser light. 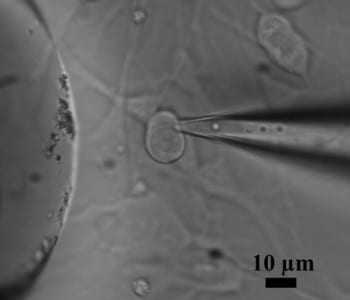 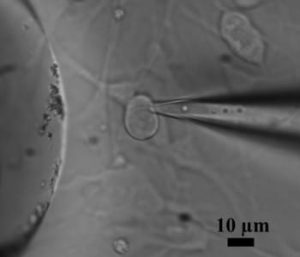 Electrical stimulation of nerves is widely used in bionic devices, such as cochlear implants, to transmit information to the brain. This allows faulty sensory receptors to be bypassed. However, electrical currents tend to spread out in tissue, which limits the accuracy with which different nerve fibres can be stimulated. This has led to increasing interest in optical methods of nerve stimulation, with several new techniques emerging in recent years. These include optogenetic techniques, where light-sensitive proteins are introduced to the nerve cells by genetic manipulation, caged neurotransmitters which are released when the cage molecule is illuminated, and infrared neural stimulation.

Caged neurotransmitters and optogenetic techniques have indeed allowed more accurate nerve stimulation and led to an improved understanding of brain function. However, although both techniques have proven invaluable for fundamental studies in neuroscience, they have some limitations: the caged molecules are gradually used up, while optogenetic techniques require genetic modification. On the other hand, infrared stimulation relies on the absorption of light in water (typically at 1850 nm) to deliver rapid pulses of heat to the nerve cells. The heating causes changes in membrane capacitance, which may in turn lead to activation of heat sensitive ion channels and thus stimulation of nerve activity.

Infrared nerve stimulation is a relatively simple approach and has proven effective in a wide range of nerve types and systems. However, the process is relatively inefficient, requiring power levels of 0.1 – 10 J/cm2, which places high demands on the laser technology. Moreover, infrared light has a relatively small penetration into tissue, due to the absorption by water. In order to address these limitations, Yong et al. have shown that gold nanorod absorbers and near infrared lasers at 780 nm can be used to stimulate nerves. Although this wavelength is not absorbed by water, it interacts strongly with the gold nanoparticles.

Yong and co-workers synthesized biocompatible silica-coated gold nanorods with absorption at precisely 780 nm and added the particles to the growth solution of cultured auditory neurons from rats. Although the particles were taken up by the cells, they had no adverse effect on the normal electrical activity of the nerve cells. However, when exposed to millisecond pulses of 780 nm laser light, they caused the cells to fire action potentials. In contrast, when the cells were cultured with silica-coated gold nanospheres that absorbed around 530 nm, the 780 nm light had no significant effect on the cells.

This work demonstrates that it is possible to stimulate nerve cells with a wavelength that has a larger penetration depth in tissue than longer wavelength infrared sources, provided that a strongly absorbing material such as gold nanorods is associated with the target nerves. The laser energy is used more efficiently because the resultant heating is more localized at the target position. Consequently the demands on the laser technology are also substantially reduced. Although a great deal more work needs to be done to establish the long term safety and efficacy of the absorbing material, this kind of approach to nerve stimulation has exciting potential for application in bionic devices. For example, if retinal nerves could be stimulated in this way, bionic eye devices would no longer require implanted electrode arrays and could potentially achieve visual responses with much higher resolution.

Nobel Prizes 2019: Physiology or Medicine
A new, inhaled siRNA therapeutic option for asthma
Ultrasound therapy improves the memory of Alzheimer's patients
New antibiotic for deadly superbug could save tens of thousands of lives