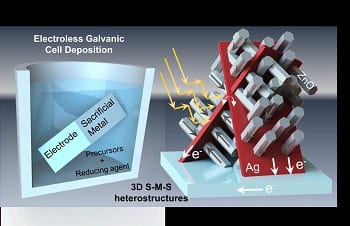 Metal-semiconductor (M-S) junctions can be found in almost all semiconductor devices, and are essential to their operation. Hence, the study and construct of prescribed M-S nano-heterostructures is directing research in numerous applications, ranging from energy to biotechnology systems. However, the design and realization of M-S based non-planar 3D architectures, which comprise multiphasic-dimensionality nanostructures, are complex and challenging, and often require multiple steps and harsh synthesis conditions. 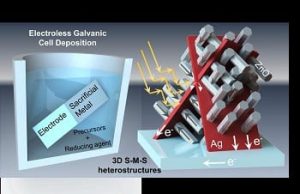 To this end, Dr. Tan and colleagues have developed a scalable and one-pot electroless galvanic cell synthesis of semiconductor-metal-semiconductor (S-M-S) interconnected nanoarray. Using an inexpensive sacrificial electron source, this technique performs galvanic deposition, without the need for any external voltage/current source, since it derives its electrical energy from spontaneous redox reactions. This signifies a distinct advantage over traditional electro-based galvanic deposition, which requires a constant voltage/current application for electrode deposition. Simplicity in execution, and confining the growth of nanostructures onto a conducting substrate, introduces a more straightforward reaction pathway for synthesis of advanced functional electrodes.