German researchers have proposed a spin clock that is based on the free spin-precession of gaseous, nuclear spin-polarized 3He and 129Xe. 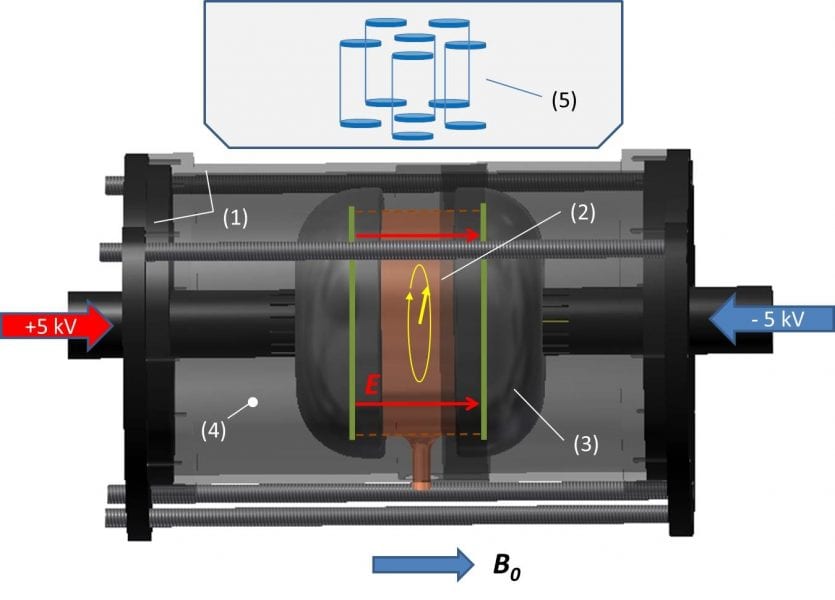 Sketch of experimental setup to measure the EDM of 129Xe.

Since Galileo Galilei and Christiaan Huygens invented the pendulum clock, time and frequency have been the quantities that we can measure with the highest precision. Since 1967 the Cs atomic clock has defined our unit of time. Modern cesium-fountain clocks realize the definition of the second with a relative uncertainty of about 4 × 10−16.

However, in the near future, the cesium clock will be replaced, and optical clocks will become the new time reference. For the experimental search for violation of fundamental symmetries in nature, being the base for addressing many fundamental questions in physics, much smaller frequencies or frequency shifts must be tracked as result of tiny changes in the clock transition. A “clock” that oscillates at low frequencies (∼10 Hz), but shows the same relative accuracy as a Cs atomic clock is needed for such experiments, because suppression of systematic effects shifting the frequency of a standard is greatly facilitated by the use of higher frequencies. Thus, frequency shifts in the pHz range caused by hypothetical interaction potentials might be accessible.

“Spin clocks” which are based on nuclear spin precession are the most promising approach to reach such sensitivity limits. German researchers have proposed a spin clock that is based on the free spin-precession of gaseous, nuclear spin-polarized 3He and 129Xe. They used the detection of the free precession of co-located 3He/129Xe nuclear spins (clock comparison) as ultra-sensitive probe for non-magnetic spin interactions. This is possible because the magnetic dipole interaction (Zeeman-term) drops out in the weighted frequency difference of the respective Larmor frequencies.

Like in free induction decay (FID) measurement, the researchers from the Universities of Mainz and Heidelberg and from the Physikalisch-Technische Bundesanstalt in Berlin monitored the decay of the transverse magnetization and related the Larmor frequency of the precessing sample magnetization to the magnetic field. Since this type of clock will preferably operate at low magnetic fields and thus at low frequencies, a superconducting quantum interference device (SQUID) could be used as magnetic field detector. The 3He/129Xe nuclear spins were polarized by optical pumping. The nuclear polarization obtained exceeds the Boltzmann polarization as used in typical NMR experiments by four to five orders of magnitude.

With the long spin-coherence times, measurements of uninterrupted precession of T ∼ 1 day can be achieved at the present stage of investigation. Together with a signal-to-noise ratio which by far exceeds 1000:1 in a bandwidth of 1 Hz, the sensitivity to trace tiny frequency changes reaches ∼ 0.1 nHz/day.

The researchers present recent results on searches for short-range P- and T-violating interactions between nucleons, and Lorentz violating signatures by monitoring the Larmor frequencies as the laboratory reference frame rotates with respect to distant stars (sidereal modulation). Finally, they discuss a new experimental initiative to search for an electric dipole moment of 129Xe (CP-violation), which strongly benefits from the long spin-coherence times obtained, reaching > 100 h and > 8 h in case of 3He and 129Xe, respectively.