A research consortium from the UK, Spain, France and Germany is using photonic crystals to improve silicon photovoltaic performance. 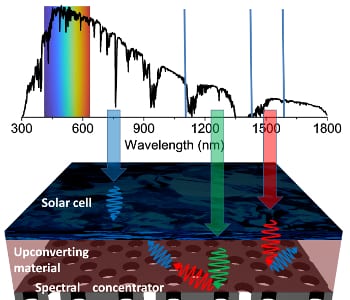 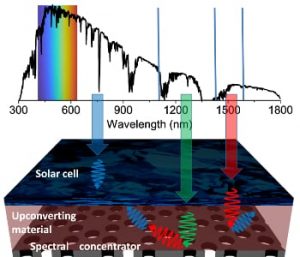 Silicon solar cells represent more than 90% of the global photovoltaic market. In part, this is due to the adequate bandgap of silicon (1100 nm), which allows the harvest of a large fraction of the wavelengths of the solar spectrum. However, this collection presents losses at shorter and longer wavelengths than the bandgap. This result in a theoretical upper efficiency limit of only about 30% of the 1000 W/m2 of the entire solar spectrum can be converted into electrical current. Thus, up to 20% of near-infrared energy of the solar spectrum is lost due to the semiconductor being transparent at such wavelengths.

A research consortium from the UK, Spain, France and Germany is now suggesting otherwise: that a solution for this could be the use of upconversion (UC) layers. These optical materials are able to absorb and combine the energy of two long-wavelength photons to produce one single high energy photon which could be absorbed by the solar cell. In this way, it is possible to use previously unharvested parts of the solar spectrum by simply adding a layer containing an UC material behind the silicon of the solar cell. Erbium-based upconverters offer this functionality, absorbing the light at the 1470-1580 nm wavelength range (which accounts for 24.5 W/m2) and emitting upconverted photons at 980 nm, where they will be efficiently absorbed by the overlying silicon device. However, this leaves a large fraction of the solar spectrum unutilized (from 1100 to 1470 nm). If this energy could be red-shifted to the 1470-1580 nm range by luminescent spices, the energy available for the upconverter could be increased up to 87.7 W/m2.

The consortium realised the combined use of quantum dots (QDs) and photonic crystals (PCs) in order to achieve this spectral concentration. The QDs provide the luminescent red-shifting, while the PC is crucial to reshape the QD emission and adapt it to the absorption spectrum of the upconverter. The PC narrows the QDs distribution emission, which increases the light concentration at a wavelength range up to 67%. Moreover, it displaces the QD emission, which increases its overlap with the absorption of up-converters by a maximum of 158%. This also helps to avoid losses by QD re-absorption. Finally, the vertical emission experiences an enhancement as high as 680% due to the confinement in the plane introduced by 2D PC.

The mobilization of this extra energy is even more relevant because UC is a non-linear process and its efficiency does not increase linearly with the incident power, but rather quadratically. Hence, an ideal increase of radiance of 3.6x could increase the best UC emission by a factor 13x, which would produce a significant leap in the field. In light of this, spectral concentration should be regarded as one of the main strategies for UC photovoltaics in the coming years.

Whiskey-Phase Exfoliation: A Golden Future for Electronics?
Mystery solved: The origin of the colors in the first color photographs
Self-repairing electronics on the horizon
A closer look at the functional properties of ferroelectric capacitors