American neuro-scientists recently demonstrated getting a small step closer to creating a better understanding of so-called mini-strokes, which are related to cognitive decline and dementia, using high-speed optical-resolution photoacoustic microscopy. 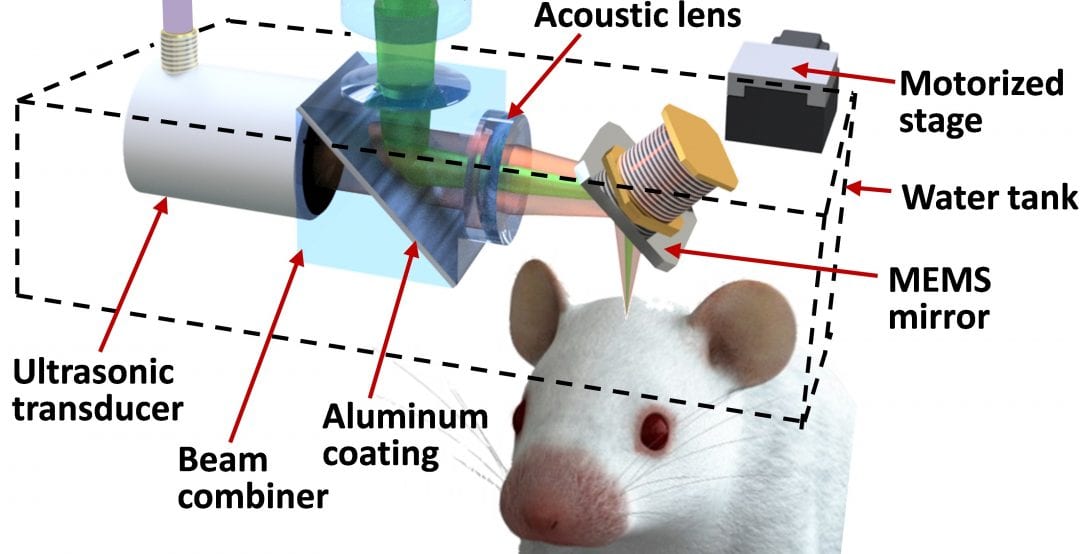 Modern brain imaging techniques have had a profound impact on neuroscience by providing structural, functional, and molecular imaging information about brain activities. With the development of genetically altered mouse models, various human neurological diseases can be reproduced in mice. Brain imaging of these mouse models has opened a new window for understanding the underlying brain mechanisms and studying disease developments at a much finer scale and in a more controllable manner. The dynamics of blood flow, the hemodynamics, of the mouse brain have been studied in detail by biomedical imaging modalities but they unfortunately all come with their limitations such as lacking depth resolution and not being able to read the finer brain activities. 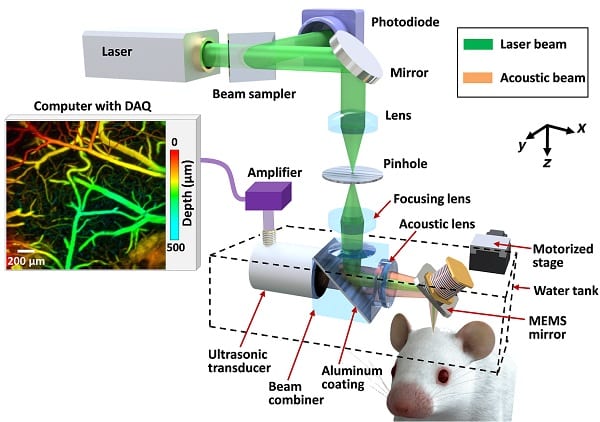 Full schematic of the high-speed OR-PAM

But there are promising techniques on the rise: photoacoustic tomography (PAT) shows the optical absorption contrast in the brain. By acoustically detecting optical absorption in tissues, PAT is capable of anatomical, functional, molecular, and metabolic imaging of small animals, with highly scalable spatial resolution and penetration depth. In particular, the rich spectroscopic and functional imaging capabilities of PAT suggest it could be a powerful tool for brain disease diagnosis and neuroimaging studies.

Researchers from several American universities recently demonstrated the promising possibilities of PAT by applying so called high-speed optical-resolution photoacoustic microscopy (OR-PAM), as a major implementation of PAT, for several brain studies. In doing so they enabled imaging the microvasculature of the mouse brain through the intact skull, and observing the hemodynamic responses evoked by various stimulations. Journal of Biophotonics recently published the aforementioned research that focused on cortical microhemorrhage and occlusion in aged brains, so-called mini-strokes: although these mini-strokes do not produce acute clinical stroke symptoms, they are nevertheless closely linked to cognitive decline and dementia. Imaging the hemodynamic response to mini-strokes, including with this newly tested technique, can provide information leading to a deeper understanding of stroke mechanisms. The results collectively suggest that high-speed PAM is a promising tool for understanding dynamic neurophysiological phenomena and improving neurophysiological studies.

Are nanoscale sensors the future for sepsis diagnosis?
Delaying second dose of COVID-19 vaccine has benefits in the short term, but depends on immunity
Discovery of an Unusual Quasiparticle in a 2D Material
Computational models: A new tool for cancer research