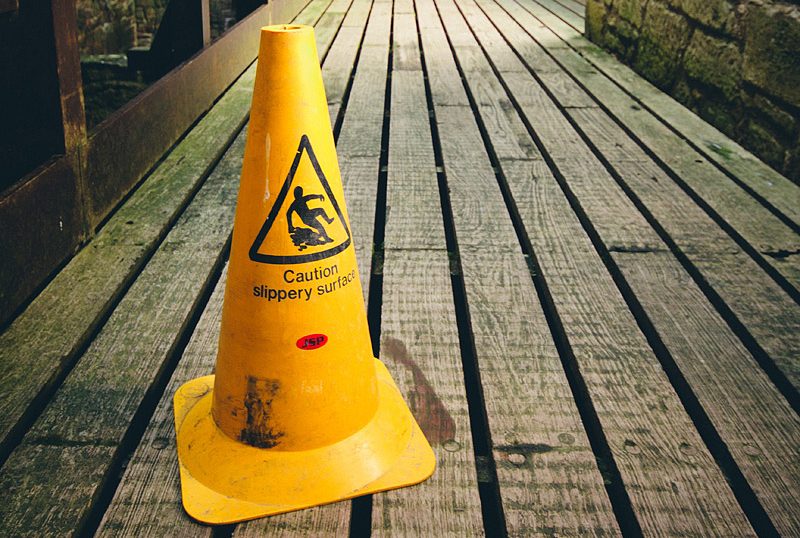 Owing to their excellent features, such as high surface area, tunable pore size, and variable structures porous materials play a major role in energy conversion and storage, catalysis, photocatalysis, adsorption, and separation. In particular, porous polymers are attracting growing interest as they combine the unique characteristics of both, polymers and porous microstructures. Conventional fabrication methods usually require sacrificial templates and multi-step preparation processes. Hence, scientists have been searching for a simple one-step method that can generate porous polymer nanostructures that also form the basis of slippery surfaces.

Scientific innovation and technologies have often been inspired by nature just like the phenomenon of slippery surfaces that was first observed in Nepenthes pitcher plants. Insects, whose oily feet normally allow them to walk up walls, slide down the slippery surface of the tube-shaped leaves due to microscale pockets filled with lubricating liquid that repels the oil. Also drops of water and oil are repelled by the slippery liquid infused porous surface (SLIPS) of the leaves.

For the biomimetic design of an artificial SLIP three requirements have to be satisfied. First, a porous surface must be created and filled with a repellent liquid that is locked into the micropores. Second, the slippery fluid must have substrate wetting but liquid repelling properties and third, the slippery liquid has to be immiscible with the repellent fluids. Usually the technology for the fabrication of SLIPS follows a bottom-up approach. This means that a microporous layer of a compound is deposited onto a substrate of a different material with different mechanical, thermal, and electrical properties. 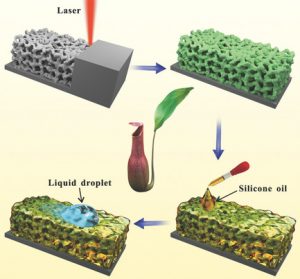 Xiaoyun Lu, Feng Chen, and co-workers at Xi’an Jiaotong University in China developed a one-step femtosecond laser direct writing strategy on various polymer surfaces, like poly(ethylene terephthalate) (PET). With this approach the substrate layer and the porous layer of the SLIP are inherently one material.  The team created the nanopores on the polymer surface via fs-laser ablation. After further treatment with fluoroalkylsilane they obtained the slippery surface by filling the pores with silicon oil as the repellent liquid in a final step.

This artificial SLIP successfully repels various liquids such as water, hexadecane, milk, Coca-Cola, ink, coffee, fruit juice, glycerol, and egg white. Furthermore, they found that the use of the original laser-induced porous PET surface as a culture substrate was beneficial for the growth of C6 glioma cells, whereas the slippery PET surface completely inhibited C6 glioma cell growth.

Given that fs-laser writing can be applied to almost any polymer surface makes it a perfect tool for the fabrication of SLIPS. Furthermore, the fact that the slippery PET surface plays an entirely different role than the original laser-induced porous PET surface in the growth of C6 glioma cells makes this approach beneficial for applications in cell patterning and the control of tissue formation.