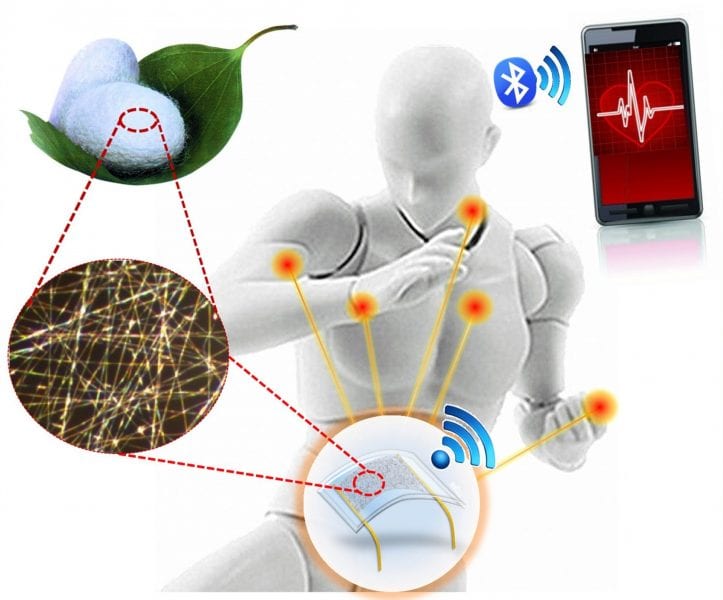 Wearable pressure sensors are useful tools for monitoring health and diagnosing disease. One type of pressure sensor in this rapidly growing field, flexible piezoresistive sensors convert mechanical deformations into resistance via an active conductive layer and flexible substrate. Polydimethylsiloxane (PDMS) is typically used as the flexible material in these devices, and nanomaterials such as carbon nanotubes and graphene serve as the conductive component. However, the fabrication process is complicated and expensive, and the toxicity of these nanomaterials is yet unknown.

Silk fibroin (SF)—a naturally abundant protein derived from silkworms—is not only amenable to low-cost fabrication but is also biocompatible and environmentally benign. After electrospinning and carbonization, SF is made into a highly conductive material that can be integrated with a PDMS film to obtain a flexible sensor. 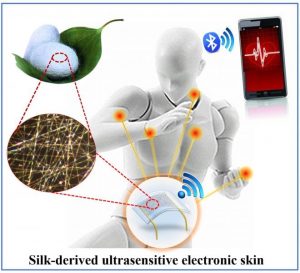 The CSilkNM sensor functioned consistently in real-time when attached to a subject’s body. When worn on the wrist and chest, it accurately detected pulse and breathing rate, respectively. The latter application is promising as a simple method for detecting sleep apnea, which currently relies on less convenient methods. When attached to the neck, the sensor could detect deep-lying jugular venous pulse (JVP), useful for diagnosing heart disease. The high sensitivity of the sensor was even further demonstrated by its ability to detect subtle muscle movements made during speech.

An array of CSilkNM sensors spatially resolved the distribution of pressure from a collection of small objects (e.g., beans, a grain of rice), which is an important feature of wearable devices or E-skin.