Controlling the shapes of catalytic nanoparticles made from noble metals such as platinum and palladium may be more complicated than previously thought. 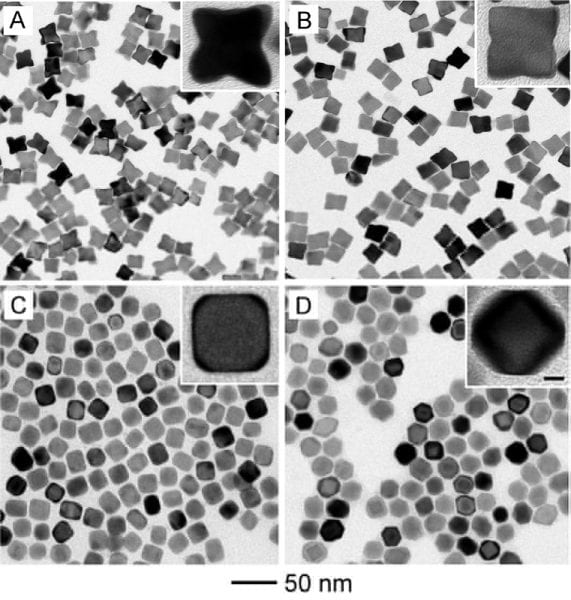 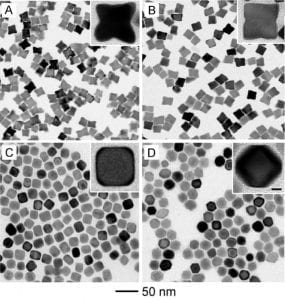 Controlling the shapes of nanometer-sized catalytic and electrocatalytic particles made from noble metals such as platinum and palladium may be more complicated than previously thought.

Using systematic experiments, researchers have investigated how surface diffusion – a process in which atoms move from one site to another on nanoscale surfaces – affects the final shape of the particles. The issue is important for a wide range of applications that use specific shapes to optimize the activity and selectivity of nanoparticles, including catalytic converters, fuel cell technology, chemical catalysis and plasmonics.

Results of the research could lead to a better understanding of how to manage the diffusion process by controlling the reaction temperature and deposition rate, or by introducing structural barriers designed to hinder the surface movement of atoms.

“We want to be able to design the synthesis to produce nanoparticles with the exact shape we want for each specific application,” said Younan Xia, a professor in the Wallace H. Coulter Department of Biomedical Engineering at Georgia Tech and Emory University. “Fundamentally, it is important to understand how these shapes are formed, to visualize how this happens on structures over a length scale of about 100 atoms.”

Controlling the shape of nanoparticles is important in catalysis and other applications that require the use of expensive noble metals such as platinum and palladium. For example, optimizing the shape of platinum nanoparticles can substantially enhance their catalytic activity, reducing demand for the precious material, noted Xia, who is a Georgia Research Alliance (GRA) eminent scholar in nanomedicine. Xia also holds joint appointments in the School of Chemistry and Biochemistry and the School of Chemical and Biomolecular Engineering at Georgia Tech.

“Controlling the shape is very important to tuning the activity of catalysts and in minimizing the loading of the catalysts,” he said. “Shape control is also very important in plasmonic applications, where the shape controls where optical absorption and scattering peaks are positioned. Shape is also important to determining where the electrical charges will be concentrated on nanoparticles.”

Adding atoms to the corners of platinum cubes, for instance, can create particles with protruding “arms” that increase the catalytic activity. Convex surfaces on cubic particles may also provide better performance. But those advantageous shapes must be created and maintained.

Natural energetic preferences related to the arrangement of atoms on the tiny structures favor a spherical shape that is not ideal for most catalysts, fuel cells and other applications.

In their research, Xia and his collaborators varied the temperature of the process used to deposit atoms onto metallic nanocrystals that acted as seeds for the nanoparticles. They also varied the rates at which atoms were deposited onto the surfaces, which were determined by the injection rate at which a chemical precursor material was introduced. The diffusion rate is determined by the temperature, with higher temperatures allowing the atoms to move around faster on the nanoparticle surfaces. In the research, bromide ions were used to limit the movement of the added atoms from one portion of the particle to another.

Using transmission electron microscopy, the researchers observed the structures that were formed under different conditions. Ultimately, they found that the ratio of the deposition rate to the diffusion rate determines the final shape. When the ratio is greater than one, the adsorbed atoms tend to stay where they are placed. If the ratio is less than one, they tend to move.

“Unless the atomic reaction is at absolute zero, you will always have some diffusion,” said Xia, who holds the Brock Family Chair in the Department of Biomedical Engineering. “But if you can add atoms to the surface in the places that you want them faster than they can diffuse, you can control the final destination for the atoms.”

Xia believes the research may also lead to improved techniques for preserving the unique shapes of nanoparticles even at high operating temperatures.

“Fundamentally, it is very useful for people to know how these shapes are formed,” he said. “Most of these structures had been observed before, but people did not understand why they formed under certain conditions. To do that, we need to be able to visualize what happens on these tiny structures.”

Xia’s research team also studied the impact of diffusion on bi-metallic particles composed of both palladium and platinum. The combination can enhance certain properties, and because palladium is currently less expensive than platinum, using a core of palladium covered by a thin layer of platinum provides the catalytic activity of platinum while reducing cost.

In that instance, surface diffusion can be helpful in covering the palladium surface with a single monolayer of the platinum. Only the surface platinum atoms will be able to provide the catalytic properties, while the palladium core only serves as a support.

The research is part of a long-term study of catalytic nanoparticles being conducted by Xia’s research group. Other aspects of the team’s work addresses biomedical uses of nanoparticles in such areas as cancer therapy.

“We are very excited by this result because it is generic and can apply to understand and control diffusion on the surfaces of many systems,” Xia added. “Ultimately we want to see how we can take advantage of this diffusion to improve the catalytic and optical properties of these nanoparticles.”