The combination of two irreversible processes is shown to lead to damage recovery and reversible restoration of particle shape. 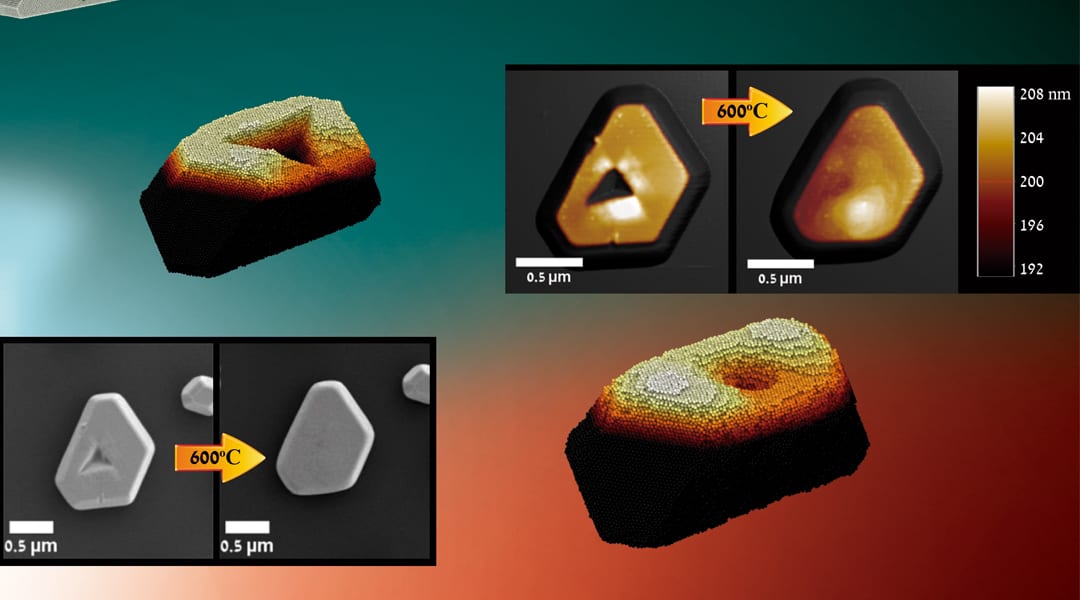 Imagine if a wrecked car would wondrously return to its undamaged state, or spilt milk would jump back into the glass. Researchers in the teams of Eugene Rabkin from the Technion in Israel and Christian Brendel from the Karlsruhe Institute of Technology in Germany have found just such a phenomenon in the damage repair of faceted single-crystalline sub-micrometer particles of gold.

Plastic deformation and capillary-driven diffusion are classical examples of thermodynamically irreversible processes. Here, the combination of two irreversible processes is shown to lead to damage recovery and reversible restoration of a particle shape. The details can be read in the leading open access journal Advanced Science. 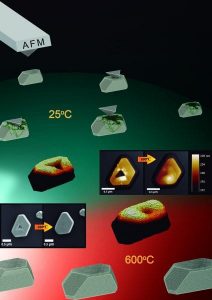 Particles of different asymmetric polyhedral shapes were indented with a sharp diamond tip controlled by an atomic force microscope (AFM). Annealing of the indented particles at the temperature of 600 °C (about 65% of the absolute melting temperature of gold) resulted in a full healing of the damage and recovery of their original shape prior to deformation, even though the original shapes did not correspond to the energy minimum and were far from the equilibrium crystal shape of gold (see Figure).

This shape recovery was unexpected since gold does not exhibit any polymorphic phase transformations in the solid state. To understand the mechanism of the new effect, atomistic molecular dynamic (MD) simulations were conducted to investigate the atomic motion during the indentation and healing. The plastic deformation during the indentation is mediated by the nucleation and glide of dislocation half-loops toward side facets of the particle. The annihilation of these dislocations creates terraces and ledges on the flat facets. These line defects serve as “guide rails” directing the curvature-driven self-diffusion of gold atoms to the indented site on the upper facet, which plays the role of a perfect sink for the diffusing atoms. As a result, the material displaced to the side surfaces during the indentation refills the indented site, recovering the particle shape.

This process could be utilized in the design of mechanically stable and damage-tolerant components and devices at sub-micrometer length scales.