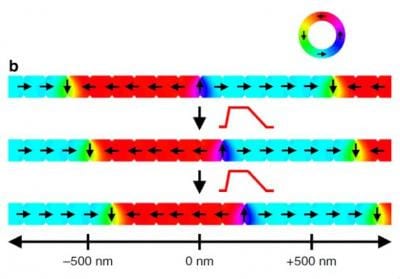 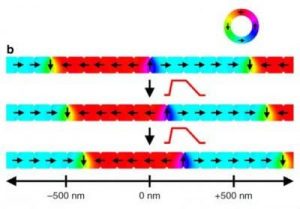 This is an illustration of the synchronous displacement of several domain walls over larger distances by means of customized perpendicular field pulses. Image: Ill.: Kläui-Lab, Institute of Physics, Johannes Gutenberg University Mainz.

Researchers at Johannes Gutenberg University Mainz (JGU) have achieved a major breakthrough in the development of methods of information processing in nanomagnets. Using a new trick, they have been able to induce synchronous motion of the domain walls in a ferromagnetic nanowire. This involved applying a pulsed magnetic field that was perpendicular to the plane of the domain walls. “This is a radically new solution,” explained Professor Mathias Kläui of the JGU Institute of Physics. “It enables us to move domain walls synchronously over a relatively large distance without them returning to their original position.” This is essential for permanent data storage, because data would otherwise be lost if domain walls were not collectively displaced in a controlled manner. The research was carried out in cooperation with the working groups of Professor Stefan Eisebitt at TU Berlin and Professor Gisela Schütz of the Max Planck Institute for Intelligent Systems in Stuttgart. The results were published in the journal Nature Communications at the end of March.

Magnetic nanowires have small regions of uniform magnetization called domains, which can be used as storage units (bits). The site where domains of different alignment meet each other is called a domain wall. Information can be stored in the domain, and read and processed by means of the movement of the domain walls. The method has the great advantage that the information – as in the case of magnetic data storage in general – cannot be easily lost. This contrasts with semiconductor-based storage systems, such as RAM in PCs, which lose all stored information without power. In addition, no fragile moving parts are required such as the read/write head of a hard disk.

It has not previously proved possible to induce the required controlled and synchronized movement of multiple domain walls using magnetic fields. The most obvious approach would be to apply a magnetic field in the direction in which the magnetization runs in the tiny nanowires. However, this has been shown to be ineffective, as there is loss of data. Mathias Kläui and his group took a radically new path. They decided to apply a pulsed magnetic field perpendicularly to the in-plane magnetized domain walls. As the Mainz researchers found in their model system, it is possible to customize the asymmetric field pulses that provide the forward- and backward-oriented forces that act on domain walls. Data can thus be moved within the storage medium in a controlled manner.

The participating physicists at Mainz University first tried out their concept in the context of micromagnetic simulations and then tested it experimentally. For this purpose, they recorded images of the magnetic arrangement in the tiny nanowires with the help of the electron storage ring BESSY II of the Helmholtz Center Berlin for Materials and Energy (HZB). As expected from the simulation, they observed displacement of the domain walls in a direction that was consistent with the model. The scientists also calculated the energy that would be necessary for the experimentally observed domain wall motion and came to the conclusion that the energy consumption of the proposed system would be quite cost-effective compared with the best components currently available.

“The results are very promising. We assume that the necessary paradigm shift will be facilitated by this new approach and it will prove possible to develop a method of efficient and controlled synchronous motion of the domain walls in nanowires,” said Kläui. This would pave the way for the development of non-volatile spintronic components of the next generation, which could be used in a wide range of applications for data storage as well as logic and sensor modules.