Antitumour platform comes of age: this system gets the responsible drug to keep itself in check for transport and delivery. 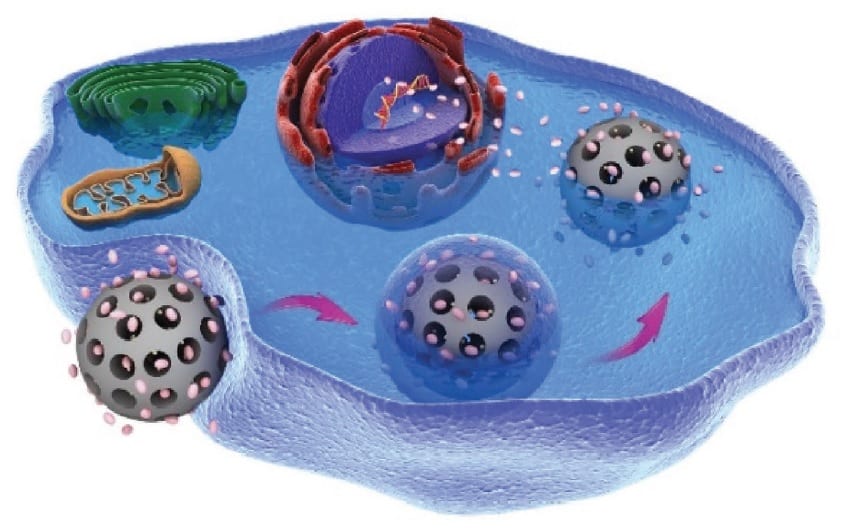 The use of a sponge to soak up spills is an unfortunately familiar concept to most people. Along the same lines, tiny particles of porous material can be filled with cargo such as drugs and used to transport and deliver them inside the body.

Such a system cannot afford to be ‘leaky’: the drugs have to stay inside the particles until we want them to come out. Much of the research on nanoparticle drug delivery systems therefore goes into appropriate gating mechanisms: the drug is usually held within the particle by a molecular ‘gate’, until its opening is triggered by an external stimulus.

The inclusion of a gating mechanism of course means additional reaction steps and additional components, with varying complexity of fabrication. The breakdown in the body of any additional molecules used, as well as their byproducts, must also be studied to determine toxicity, to decide whether the drug delivery system is even safe for use.

Often, the gating mechanism is insufficiently sensitive to the required triggers, and there can still be some premature release of the drug, reducing therapeutic efficacy and increasing the chance of side-effects.

Researchers from China have now managed to cut out the gating component completely, coaxing the drug to perform this function by itself.

They selected mesoporous silica nanoparticles (MSNs), proven biocompatible carriers, to host the amino-containing antitumor drug doxorubicin (DOX). The MSNs are functionalised with benzaldehyde, exploiting a dynamic hydrolysis reaction between this and the DOX to form a benzoic–imine covalent bond, which is affected by small changes in the surrounding pH. 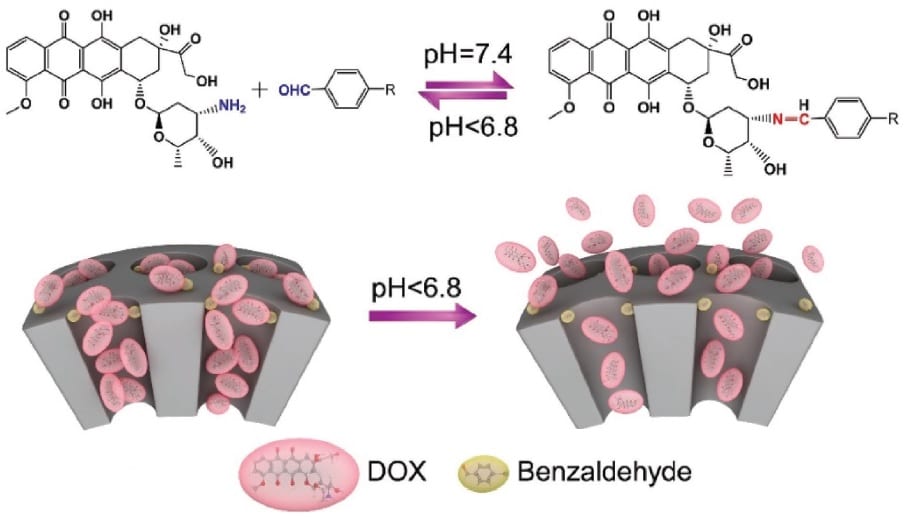 Tumour tissue is known to have a slightly lower extracellular pH than healthy tissue. When the pH drops below 6.8, the benzaldehyde and DOX molecules split apart and the ‘gate’ opens, releasing the drug right where it’s needed. An effect on tumour tissue growth was observed even at very low DOX concentrations.

The authors of the study indicate that this system could be easily adapted to deliver any natural amino-containing biomolecule within the body, including DNA/RNA or proteins.

See the results of their cellular uptake test and in vivo study now in Advanced Functional Materials.