Researchers in Germany design self-folding 3D polymeric materials that could lead to advances in microfluidics, biomaterials, and soft electronics. 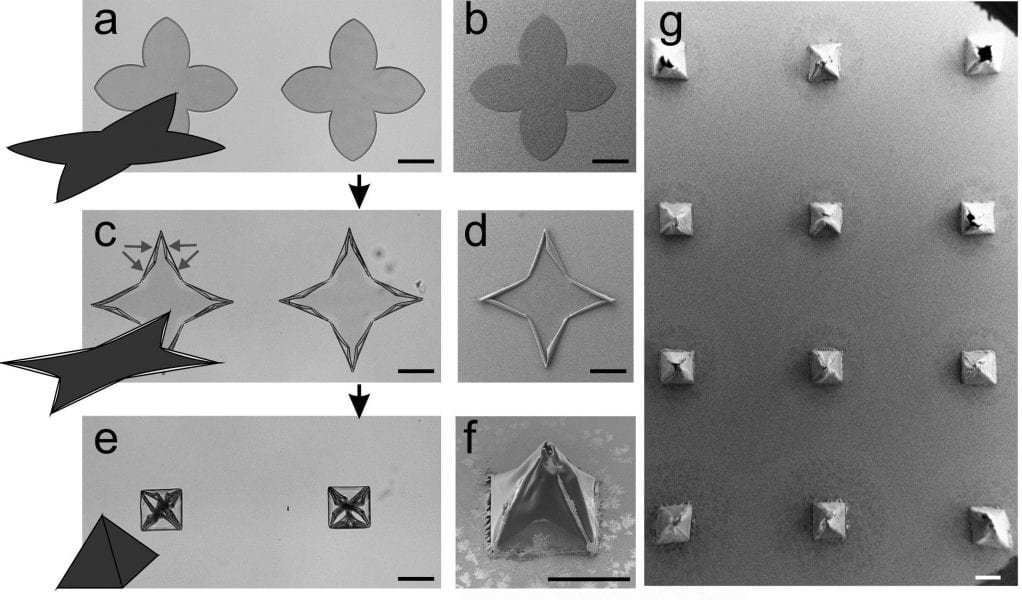 Self-organisation and assembly at the sub-millimeter-scale are fundamental for structure formation in nature, and, not surprisingly, are inspiring the design of new, intelligent materials with fascinating properties. A new platform has been developed by researchers in Germany allowing the strategic design and fabrication of 3D polymeric materials with complexity surpassing that found in nature. The new materials yielded could lead to significant, foreseeable advances in technologies such as microfluidics, biomaterials, and soft electronics.

Dr. Leonid Ionov and co-workers employed a thin self-folding polymer film as the biomimetic material. In general, self-folding polymer films consist of two different polymers, one of which is stimuli responsive. This results in non-equal expansion upon exposure to an external stimulus (e.g., temperature, pH, light), and hence folding of the film. Until now, however, a facile approach to control this process and attain specific geometries has been lacking. The two general approaches previously used either involve homogeneous bilayers from which only simple, round structures are attained or rely on complex, local patterning of active materials on the film which act as hinges, permitting more sophisticated geometries to be realised. Significantly, both approaches only permit folding to occur in a single step. In contrast, the new approach developed is not only multistep, but affords sharply hinged structures without the tedious need for pattering of active polymers.

At the crux of this technique is the fact that the thermally-induced swelling of the polymer bilayer film used is not homogeneous; rather it occurs progressively with a path dependence that is determined by the local film geometry. This is a consequence of water only being able to penetrate the bilayer from its periphery. The swelling and subsequent folding of the film occur as the water diffusion front progresses inwards.

By analysing the folding patterns, the researchers identified, supported by numerical simulations, an underlying set of folding rules, demonstrating that the isotropic films bend in a predictable manner. Applying these rules, they were able to tailor the initial film, such that hinges formed at desired locations upon thermal activation. The folding process could thereby be directed in multiple, discrete steps, forming complex 3D structures. An elegant example of this is the pyramids shown in the figure and movie above.