Recent advances in fabricating RNA nanostructures are highlighted, including their applications in vivo as imaging or therapeutic devices via specific delivery and targeting, or intracellular expression and assembly. 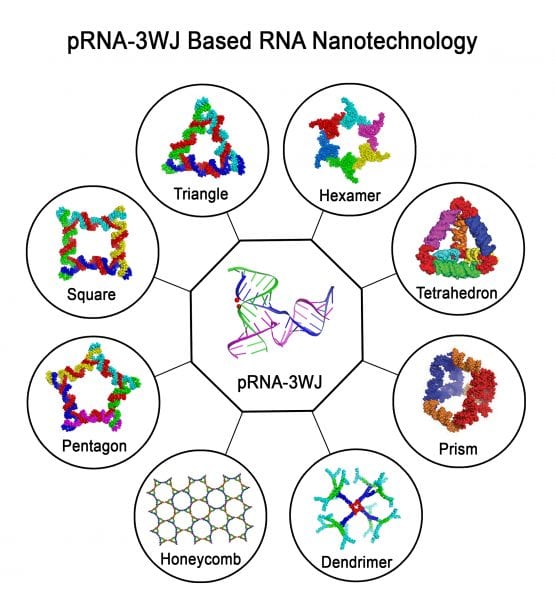 The “central dogma” in biology is that DNA encodes for RNA, RNA gives rise to protein, and protein plays a key role in functioning of the cell. However, human genome sequencing revealed that only 1.5% of the genome codes for proteins, while the other 98.5% was popularly believed to be “junk DNA”. Subsequent studies revealed that the majority of the “junk DNA” actually codes for small or more recently discovered long non-coding RNAs that play a critical role in the regulation of cellular function. It has been speculated that in addition to the two milestones in drug development history, chemical and protein drugs, a third milestone is expected to be RNA as either drugs or drug targets. The versatility of RNA structures and ever-increasing functional roles of RNA in cells make RNA a fascinating material for use in nanotechnology and nanomedicine. 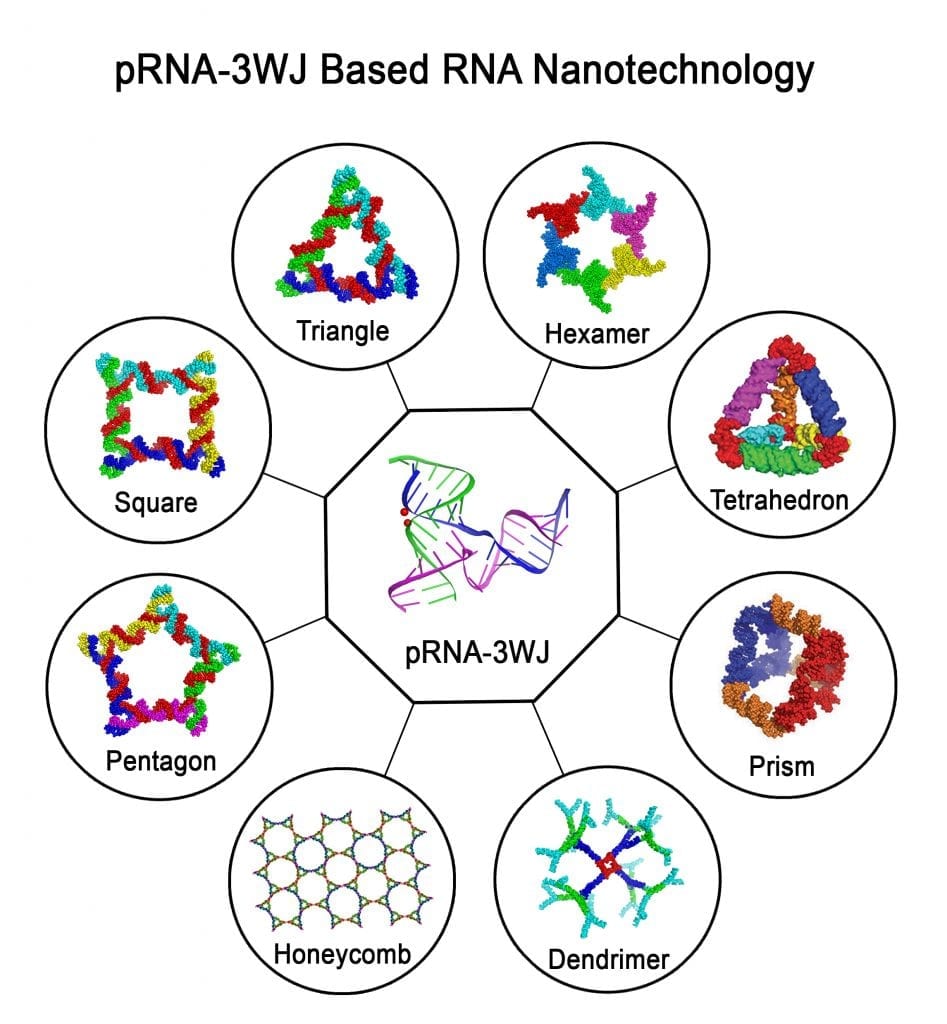 The concept of RNA nanotechnology was developed in 1998, when it was shown that RNA structures of dimer, trimer, tetramer, pentamer, and hexamer shapes can be fabricated by bottom-up self-assembly using engineered RNA fragments. However, chemical and thermodynamic instability, toxicity, and immunogenicity of RNA made many scientists turn away from RNA nanotechnology. Recently, these bottlenecks have been overcome to a large extent. Chemical modifications of RNA make it resistant to degradation in the body. The discovery of a three-way junction (3WJ) motif of phi29 motor pRNA enabled researchers to generate thermodynamically and mechanically stable RNA nanoparticles. The finding that the immunogenicity of RNA nanoparticles is dependent on shape, size, and sequence provide RNA nanoparticles with dual function. That is, RNA nanoparticles can be made to be non-immunogenic to serve as a drug delivery vehicle, or they can be made to be strongly immunogenic to serve as vaccine adjuvants or reagents for immunotherapy.

Larger RNA molecules can be viewed as modular structures built from a combination of many building blocks connected via different linkers. By exploiting the diversity of RNA motifs, varieties of RNA architectures can be fabricated with precise control of shape, size, and stoichiometry. This is exemplified by the 3WJ motif derived from phi29 DNA packaging motor RNA. They retain authentic folding and independent functionalities of all incorporated modules, including targeting RNA aptamers and therapeutic siRNA, miRNA, or ribozyme. The pRNA nanoparticles can specifically target solid tumors and metastatic cells in mice with little to no accumulation in healthy organs after systemic injection. RNA nanoparticles can further deliver therapeutics to inhibit tumor growth at low doses while minimizing collateral damage to healthy cells. The pRNA-3WJ has also made it possible to assemble RNA nanoparticles in the cell by cloning and expression of RNA.

A recent review in WIREs RNA focuses on 2D RNA triangles, squares, and hexamers, 3D and 4D structures built from basic RNA building blocks, and their prospective applications in vivo as imaging or therapeutic agents via specific delivery and targeting. Methods for intracellular cloning and expression of RNA molecules and the in vivo assembly of RNA nanoparticles are also reviewed.