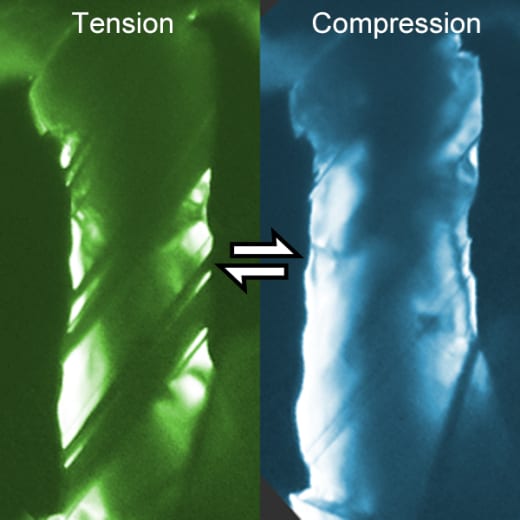 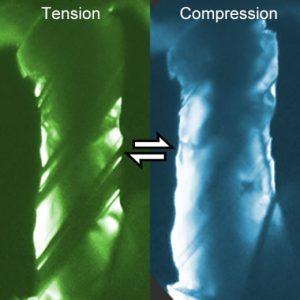 Detwinning in full view: twins, seen as dark areas in the left image, disappear upon load reversal in the right image.

Microscopic objects show unexpected properties with respect to their strength and deformation behavior. With reduced sample dimensions, the strength increases and deformation mechanisms are subject to change. Knowledge of the expected mechanism is detrimental, since this strongly influences strength and ductility of nanomaterials. An international team of researchers from Korea, Germany, and Austria recently showed that gold nanowires can reversibly deform by the creation and removal of mechanical twins under tensile and compressive load, respectively. The underlying atomistic processes were explained by molecular dynamics simulations and the whole story recently published in Nature Communications.

Twinning is classically considered a directional deformation mode, in other words the plastic deformation occurred once is permanent. In this work, employing quantitative nanoscale deformation experiments in situ in a transmission electron microscope, the authors observed for the first time that nanoscale twins that formed during tensile loading of a gold nanowire are repeatedly erased upon subsequent compressive loading. This new deformation mechanisms termed detwinning allows for reversible plastic deformation involving large strains of more than 30% in a pseudo-elastic manner by growth and shrinkage of nanotwins. This behavior can be beneficially utilized in applications requiring high ductility in addition to ultra-high strength, for example, to minimize damage for cyclically loaded nano-objects used in integrated circuits or for mechanical energy storage in nanoelectromechanical systems.

Daniel Kiener is an author on the Nature Communications paper.