Intensely coloured low-cost films made from cellulose could be used in place of toxic dyes, or to detect counterfeit materials. 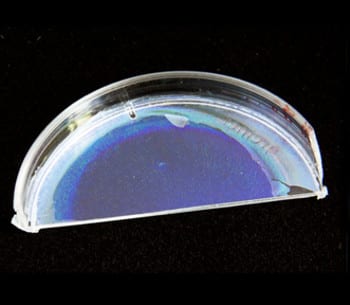 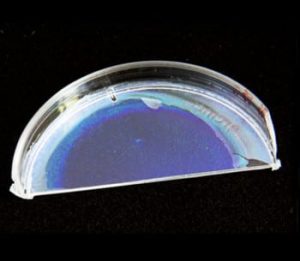 Brightly-coloured, iridescent films, made from the same wood pulp that is used to make paper, could potentially substitute traditional toxic pigments in the textile and security industries. The films use the same principle as can be seen in some of the most vivid colours in nature, resulting in colours which do not fade, even after a century.

Some of the brightest and most colourful materials in nature – such as peacock feathers, butterfly wings and opals – get their colour not from pigments, but from their internal structure alone.

Researchers from the University of Cambridge have recreated a similar structure in the lab, resulting in brightly-coloured films which could be used for textile or security applications. The results are published in the journal Advanced Optical Materials.

In plants such as Pollia condensata, striking iridescent and metallic colours are the result of cellulose fibres arranged in spiral stacks, which reflect light at specific wavelengths.

Cellulose is made up of long chains of sugar molecules, and is the most abundant biomass material in nature. It can be found in the cells of every plant and is the main compound that gives cell walls their strength.

“Nature is a great source of inspiration: we can use biocompatible, cheap and abundant materials for making materials that have applications in everyday life,” said Dr Silvia Vignolini from Cambridge’s Department of Chemistry, who led the research. “The materials that we produce can be used as substitutes for toxic dyes and colorants in food but also in security labelling or cosmetics.”

The researchers used wood pulp, the same material that is used for producing paper, as their starting material. Through manipulating the structure of the cellulose contained in the wood pulp, the researchers were able to fabricate iridescent colour films without using pigments.

To make the films, the researchers extracted cellulose nanocrystals from the wood pulp. When suspended in water, the rod-like nanocrystals spontaneously assemble into nanostructured layers that selectively reflect light of a specific colour. The colour reflected depends on the dimensions of the layers. By varying humidity conditions during the film fabrication, the researchers were able to change the reflected colour and capture the different phases of the colour formation.

“Cellulose is a well-known, cheap material used in the paper and pharmaceutical industries, and is also used in filters and insulating materials, however its potential is not yet fully exploited,” said the paper’s lead author Dr Ahu Gumrah Dumanli, of the University’s Cavendish Laboratory. “It is important to understand the materials fully if we want to use them for application in optical devices.”