Nanostructured hydroxyapatite (nHAp) appears to have a great potential to revolutionize the hard tissue-engineering field, starting from bone repair and augmentation to controlled drug delivery systems. 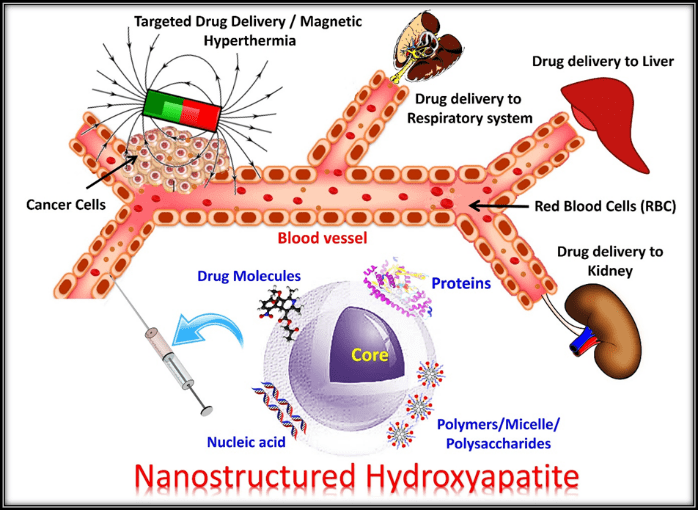 One of the most important bio-ceramics is hydroxyapatite (HAp), particularly of nanometric dimensions (nHAp). While HAp belongs to the family of calcium phosphates and is already used in biomedical applications such as tissue engineering, nHAp appears to be of special significance as it represents the basic inorganic building blocks of major normal and pathological calcified tissues of mammals, such as bones, teeth, and antlers. According to recent discoveries in the biomineralization field, zillions crystals of biologically formed nHAp are nucleated in body fluids, and afterward, self-assembled into the aforementioned solid structures. For example, atherosclerosis results in blood vessel blockage caused by deposition of a solid composite of cholesterol with nHAp, while dental caries (tooth decay) and osteoporosis (a low bone mass with microarchitectural changes) mean a partial dissolution of teeth and bones, respectively.

Thus, the processes of both normal and pathological calcifications might be considered as an in vivo crystallization of biologically formed nHAp, while dental caries and osteoporosis might be considered as an in vivo dissolution of biologically formed nHAp. In addition, both a greater viability and a better proliferation of various types of cells have been detected on tiny crystals of nHAp, in comparison with the larger crystals of the same compound. All these effects are due to a higher surface-to-volume ratio, an increased reactivity, and biomimetic morphologies of nHAp. Therefore, preparation of nHAp of diverse shapes and dimensions, as well as loaded by various admixtures and dopants appears to be an important topic of modern materials science, while nHAp-containing formulations have been already tested clinically for various purposes. Currently, the major efforts are focused on the possibility of combining nHAp with cells, drugs, and other biologically active substances for multipurpose applications.

A group of researchers at the Benemérita Universidad Autónoma de Puebla, Mexico and from Moscow, Russia, performed a thorough analysis of literature and composed a review article, recently published in WIREs Nanomedicine and Nanobiotechnology, devoted to the recent progress on fabrication and drug delivery applications of nHAp. The review covers a broad spectrum of nHAp and HAp modified inorganic drug carriers, emphasizing some of their specific aspects those needed to be considered for future drug delivery applications.