Scientists from Italy and the USA present an innovative processing method for the fabrication of 3D scaffolds for bone tissue engineering using either fused deposition or conventional hot extrusion. 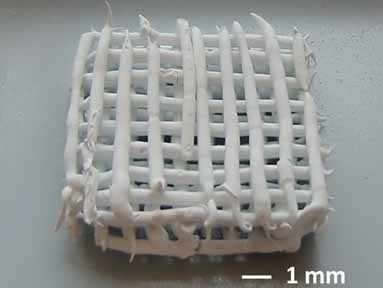 The main problem with the production of preceramic polymers is the formation of cracks and pores upon heat treatment. It is associated with the gas release and shrinkage occurring during the polymer-to-ceramic conversion. For the most part, this problem can be solved using so-called ‘active fillers’. These are metallic or metal-silicide particles capable of reacting chemically with the decomposition products or the pyrolysis gas in the furnace during the conversion. Nevertheless, it is still diffficult to sinter silicate ceramics from mixtures of oxides.

Lately, experiments have shown that wollastonite (CaSiO3) ceramics, a well known biomaterial, can be obtained from silicones containing calcium oxide (CaO) precursors like micro-powders or nanoparticles.

In this field a group of scientists from the University of Padova in Italy conducted a study in cooperation with Prof. P. Colombo from the Pennsylvania State University, USA. In recent work they present an innovative processing method employing preceramic polymers containing micro- and nanometer-sized particles of calcium carbonate (CaCO3), which act as reactive fillers. With the aim of obtaining wollastonite ceramics, they employed a solid and a liquid silicone in their study. Extrusion experiments were conducted on both thick pastes (cold extrusion) and melts (hot extrusion). The researchers also added hydroxyapatite powders to modify the biological response of the material.

In the study, silica from the decomposition of the silicone resins reliably reacts at low temperature with the calcium oxide (CaO) deriving from the fillers and yielding wollastonite ceramics. This approach enables the fabrication of 3D scaffolds for bone tissue engineering via fused deposition or via conventional hot extrusion. The results provide evidence of the flexibility of the approach employing silicones containing fillers.

The scientists from Italy and the USA obtained further improvements by implementing several processing advancements, such as enhancing the mixing of components before extrusion. However, the enhancement of mixing and fused deposition will constitute the focus of their future efforts.