Reaching for the Stars at a Microscopic Level 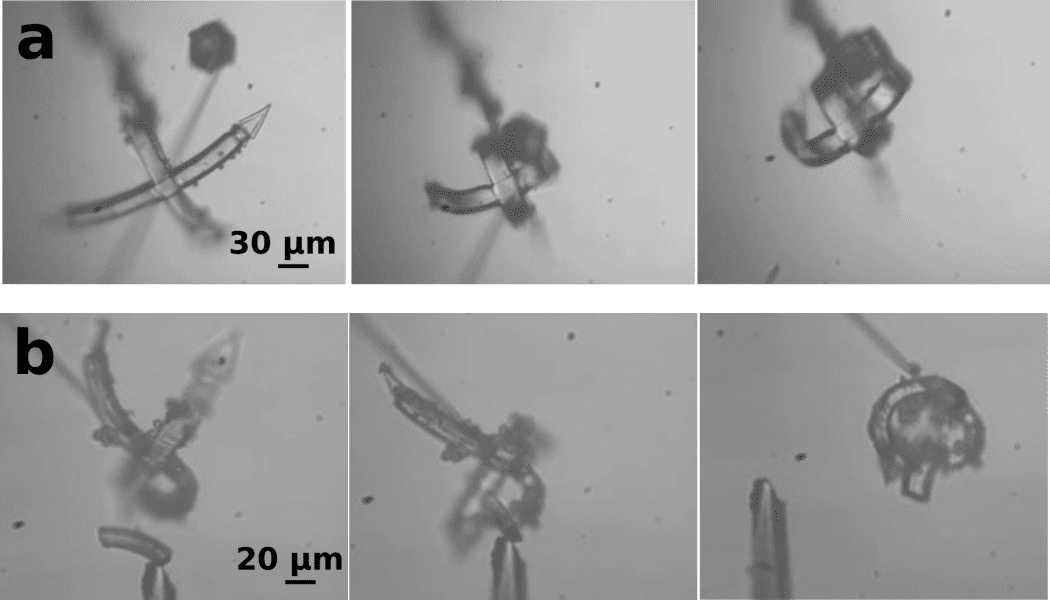 In nature, different strategies for object grabbing can be seen, including the use of fingers, mouths and limbs (e.g., tentacles). The ability to reproduce grabbing and object manipulation in robotics is a fundamental task, and it represents a great challenge. It is an even greater challenge at the micrometer scale, where scientists hope to implement robotics in microscopic situations, such as to enhance the functionalities of lab-on-chip microfluidic devices, for noninvasive surgery and diagnostics.

The challenge at the microscopic level is to create a microrobot that is able to perform tasks where they recognize and manipulate objects, and can make “decisions” without human intervention by taking into account the local environment. Until now, actuators have been realized, however only with sub-millimeter dimensions or bigger.

In Advanced Materials, a team of researchers from Italy report their prototype of a microscopic light-fueled microhand, designed with four bending polymeric orthogonal fingers, able to capture microscopic objects. The hand was prepared with a liquid-crystal network (LCN), suitable to be polymerized and cross-linked by direct laser writing (DLW), a photolithographic technique where an azo-dye molecule is incorporated to assure photoresponsitivity through an intermediate heating step.

The advantages of the device are manifold. For example, it is extremely small and has the ability to be controlled externally by a light-beam or autonomously in response to particles with specific optical properties (e.g., the hand can grab particles based on their absorption spectrum). It can also respond in both wet and dry conditions, allowing for incorporation into photonic waveguides or resonators, and microfluidic lab-on-chip devices. The technology is relatively cheap and the microhand, together with other components, can be produced in large quantities. Finally, these materials are biocompatible, which will enable use of the hand in biomedical applications in the future.

a–f) Demonstration of the autonomous operation of the microhand. a–c) Sequence of images during the approach of carbon nanopowder, until the microhand fully closed (d). e,f) The microhand returned to its original shape when the carbon nanopowder was removed. g,h) Sequence of images during the approach of white titanium dioxide cluster. g) Initial stage with the titanium dioxide cluster attached to a glass fiber which was progressively brought closer to the microhand. (h), There was no response due to the optical properties of the cluster.