The possibility to obtain work from nanomachines is a step closer to reality as scientists provide a quantitative framework describing interfacial interactions in a nanobiomolecular system. 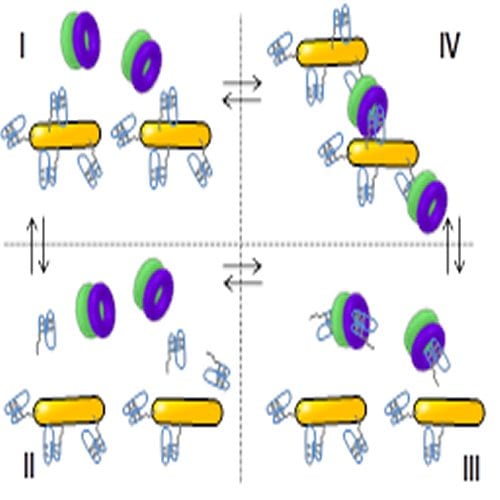 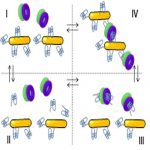 The possibility to obtain work from nanomachines is a step closer to reality as US, Italian, and Spanish scientists provide a quantitative framework describing interfacial interactions in a nanobiomolecular system, which takes into account contributions from the surface itself as well as surface coverage and binding events. This framework should allow new, better nanomachines to be designed and constructed.

Nanobiomolecular machines are attractive to scientists and technologists for their potential to perform mechanical work better than most nanomachines designed by humans. To generate work, biomolecules must interface or interact with surfaces. Unfortunately, this interface between biomolecules and surfaces is difficult to control and poorly understood; many noncovalent interactions can form between the biomolecules and the surface, which are difficult to quantify and control. These issues present a huge challenge not only for nanobiomachines, but also for any application with surface-immobilized biomolecules.

Now scientists led by Kimberley Hamad-Schifferli at Massachusetts Institute of Technology, USA, and Paolo Bergese at University of Brescia, Italy, have developed a new thermodynamic treatment that enables them to quantify the interfacial effects in a nanoparticle-protein-surface system. The particular system they chose included thrombin binding aptamer (TBA), a DNA strand that likes to bind to thrombin, a protein; this binding is easily reversible and thus the complex can be viewed as being in thermodynamic equilibrium. The scientists attached TBA to a gold nanoparticle and watched as aggregation of these particles took place when thrombin was added. They found that the degree of aggregation depended on many factors, including very tiny changes to the surface of the nanoparticle. They developed a framework to describe all of the main contributions to this equilibrium quantitatively, including aptamer coverage on the surface, sequence, surface chemistry, and blocking proteins, whereas all previous studies in the area had provided only a qualitative idea. They showed that surface work is key for quantifying these interfacial behaviors and interactions.

The researchers believe that their approach could be used to quantify similar effects in any system that incorporates nanoparticle-confined ligand-receptor binding and so should be useful to biomolecular scientists all over the world. Their results on this particular system should also enable further studies to concentrate on making nanomachines move by extracting work from molecular movements. One day, we should see nanopowered machines in action.